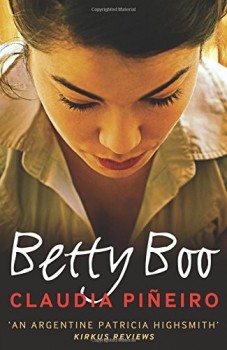 When Pedro Chazaretta is found with his throat cut and the knife in his hand, some say suicide and some say murder – his wife died the same way and Chazaretta may have had a hand in it.

When Pedro Chazaretta is found with his throat cut and the knife in his hand, some say suicide and some say murder but the most common view is that it is only apposite, given that his wife died the same way and Chazaretta may have had a hand in her death.

Interest in such a murder, especially in such a protected area as a Buenos Aires country club, a gated community for the rich, is rich fodder for the newspapers. Rinaldi, boss at El Tribuno, assigns a cub reporter ‘Crime Boy’ for the journalism, and his ex-mistress Nurit Iscar, a crime fiction writer, for more thoughtful pieces.

Crime Boy relies mainly on the internet for his information, a source scorned by ex-crime reporter Jaime Brena, now transferred to the society pages, and hating every minute. Brena cannot forebear from helping Crime Boy with the case, especially as he has long been in love with Iscar; the opportunity of getting closer to her is irresistible.

To gather the local gossip, Iscar temporarily takes up residence in the country club; Brena and Crime Boy pay a call, and are given the opportunity to visit Chazaretta’s house. While there, they notice that a photo has been removed from its frame, a photo which they establish showed Chazaretta with a number of old school friends. Investigation soon shows that Chazaretta is not the only one of the group to have died recently.

As with Pineiro’s earlier works, the crime component is only a starting point and there is plenty going on to hold the reader’s interest, including digressions on matters of interest. Authors’ reluctance to update their pictures on book jackets, the physiological effects of ageing, school reunions and the declining standards of speech are only some of the topics which get a workout through the minds of her characters. The ridiculous ‘security’ arrangement for obtaining access to country clubs, and the continuing need for brave journalists prepared to take on the police or politicians are points made very forcefully.

The relationships between key characters are also interesting. Iscar’s friends Carmen and Paula give her plenty of advice when it appears that Iscar may be up for resuming an old affair with Rinaldi, but Iscar is no longer in love and her observations on how this makes her view the guy differently are acute and very funny. The attraction between Iscar and Buena grows during the book, giving rise to the question as to whether they will get together before the end.

There are a few points of style which some may find difficult. The book is written in the present tense throughout, paragraphs are pages long, and dialogue is given without punctuation. All this is easily forgiven, however; the book is a convincing tale of real people, and as entertaining as it is there are some very important observations being made about life today in Argentina – or anywhere else, for that matter.