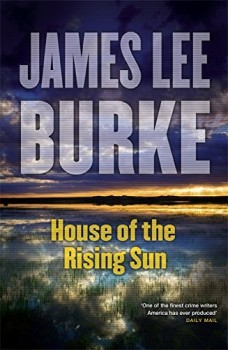 House of the Rising Sun

Texas Ranger Hackberry Holland struggles to be reunited with his estranged son, but his efforts are imperilled by the possession of a precious artefact he stole during the Mexican revolution.

In my opinion James Lee Burke is by far America’s outstanding crime writer – and probably its finest living writer. His latest masterpiece continues the story of the Holland family, unsentimental, hard-charging Texas lawmen for whom confrontation is a way of life.

Few authors would have the nerve – or the skill – to debunk the American myth so thoroughly as Burke does. He mixes racism, the struggle of the early trades unions, the treatment of native Americans, the exploitation of the poor, the corruption of big business and government and Hollywood’s rosy version of the country’s history with lyrical and vivid, cinematic descriptions which bring scenes and places to startling life. And he is not afraid to throw in more than a touch of mysticism and a touching and often tender love story as a golden thread running through the brutality and violence.

The Holland family are big men in every sense. Hackberry Holland is a giant at 6ft 8”. But like all Burke heroes – his modern equivalent, New Orleans detective turned rural deputy Dave Robicheaux is the same – he has two great failings, an inability to stay off the bottle and a pathological desire to return evil with evil, brutality with brutality, death with death.

The story opens at the turn of the century in revolutionary Mexico where Holland is fighting with Pancho Villa’s insurgents. He escapes capture and death in a violent shoot-out and returns to Texas with a chalice he has stolen from a brutal and bloodthirsty Austrian arms dealer. Years later, his estranged son Ishmael is badly wounded while serving as an officer on the Marne with one of the black American battalions in one of the last great battles of the First World War.

Thereafter their stories run in parallel. Holland brawls and boozes to the point of self-destruction in the bordellos and saloons of San Antonio during the reign of the infamous bandits of the Hole in the Wall Gang, all the while hoping to reunite with his son, Ishmael, who has become drug dependent through his injuries, becomes the target of the arms dealer who seeks to regain the chalice and to exact vengeance on his father.

Three women – all beautiful and strong enough to stand toe to toe with the toughest men – have parts to play in this remarkable tale: Ruby Dansen, the Danish immigrant who is Ishmael’s mother and Holland’s true love; Beatrice deMolay, a madam descended from the last Grand Master of the Templar Order, and Maggie Bassett, self-centred whore and one-time lover of the Sundance Kid, whose plotting makes Lady Macbeth look like a Sunday school teacher. Each in their own way, aids Holland in his quest.

The calculating deMolay and idealistic Dansen stand out, but all Burke’s characters, even those with minor parts to play, are expertly drawn. The real-life outlaws – John Wesley Hardin, Harry Longabaugh (Sundance), Butch Cassidy and others – are shown as they really were, brutal, sadistic killers.

The pace is relentless, with violent action relieved by moments of mystical near-beauty. But there is a remarkable cohesion, despite the impression that you are sometimes viewing scenes through a slightly smoky glass. Even the near-unbelievable provenance of the artefact in Holland’s possession and the lust it inspires in a villain who is clever, articulate, visually striking and totally evil, somehow appears quite normal as the story races to its inevitable, frenzied dénouement.

Burke never treats his readers as idiots who need each point explained. This is another example, possibly his best since In The Electric Mist With The Confederate Dead of his amazing command of, and ability to, combine plot and language to produce a brilliant, devastating and compelling whole.