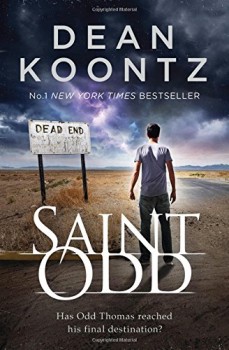 Odd Thomas has returned to his home town of Pico Mundo, where the carnival is back and with it the Gypsy Mummy. Now another attack on the town is imminent, and Odd plans to stop it.

Odd Thomas has come full circle. A dream has sent him back to his home of Pico Mundo, and the carnival is back, the same one that that was in town on the night of the massacre in the Green Moon Mall. Twenty-one months have passed since the Gypsy Mummy, one of the carnival’s fortune-telling machines, gave Odd and Stormy a fortune card saying ‘You are destined to be together forever.’

And it’s 21 months since Stormy was killed in the attack on the mall. Odd has carried their fortune on a card with him on all his adventures and battles since the night of Stormy’s death.

Odd has had a nightmare in which he saw Pico Mundo drowning. On his way back to his home town, he’s attacked, and when he reaches the empty shell of the mall, three satanic cult members attempt to kill him. Certain of the meaning of his dream, Odd gathers his old family around him, and with the help of new friends, he sets about trying to save his beloved town from its fate.

In this, the seventh in the series and presumably the last, Saint Odd returns to its Odd Thomas roots, reuniting Odd with his surrogate fathers, the writer Ozzie Boone, and Pico Mundo’s chief of police, Wyatt Porter, and with his new family, those who know about his psychic gifts and the other-world enemies he’s been fighting.

Familiar characters from the series ebb and flow around Odd as he moves through Pico Mundo searching for the cult who are planning on destroying the town, and the most colourful ones are at the carnival, where Kootz’s descriptive narrative comes alive.

But the single strand plot is the book’s one failing. Every scene feels stretched to breaking point while at the same time, it hops from place to place, never settling anywhere long enough to spend the time with characters it would good to get to know better. The novel reads like a means to an end, a basic plot to move Odd from one life to another, to end the series.

Despite not being the best of the seven, this is a touching goodbye to a lovely character. If indeed it is a goodbye. Because in Odd’s world, every end is a beginning.