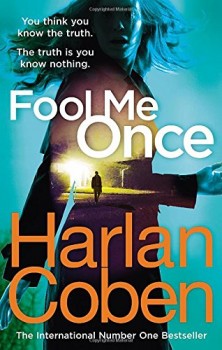 Maya knows her husband is dead. She saw him killed. But when the hidden camera she’s installed to keep her eye on the nanny shows him seemingly still alive, she has to get at the truth, no matter what it costs.

Take a person with a dark secret in their past, throw in a tragic accident and/or a murder, then spice up with the seemingly impossible and mix well. Voila, you have just created the latest Harlan Coben book.

When an author has more than 20 novels to their name, there’s always some element of déjà vu when you’re reading them, but, despite the similarity of many of the central plot devices, Coben can still produce a very readable thriller peopled with interesting characters such as ex-military pilot, Maya. She’s still struggling with PTSD resulting from a decision she took, in the heat of combat, to save soldiers’ live at the expense of civilian casualties.

As Maya’s tactless brother-in-law points out, death does have a habit of following her around. First her sister is brutally murdered then, only a few years later, her husband Joe is shot dead before her eyes. So far, so normal, but then Coben throws in his trademark curve ball. Checking the ‘nanny cam’ a friend bought for her so she can keep an eye on her child as most paranoid New Yorkers appear to be doing, Maya sees something that turns her life upside down – Joe, apparently very much alive.

What follows is a thoroughly enjoyable romp with Maya pitted against tough odds to uncover the truth about her husband’s death. His super-rich family close ranks around the nanny who, when confronted with the evidence gleaned from the hidden camera, pepper-sprays Maya and steals the memory card, and even her friends have difficulty believing her side of the story.

Even though I know what to look out for now in Coben’s plotting, he still managed to stay one step ahead and the denouement definitely came as a surprise, although it probably shouldn’t have done. The plot moves on at a very respectable clip, the characters are generally likeable, and even the somewhat slimy whistle-blower who made headlines with the story of Maya’s combat decision comes over as not wholly irredeemable.

Despite  - or maybe because of - serving up essentially the same formula on which his success has been based, time and time again, Coben remains one of the most reliable thriller writers around and his standalones, like Fool Me Once, make it very easy to entice new readers on board.