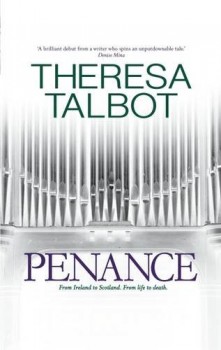 DI Alec Davies investigates the death of an elderly priest on the altar in a Glasgow church, while TV journalist Oonagh O’Neill delves into some of the Catholic church’s unpalatable secrets.

It’s not always easy depicting fictional journalists and television presenters, and even those who’ve worked in the industry often seem to churn out little more than unconvincing stereotypes, but Theresa Talbot has managed to break that mould in her penetrating fiction debut, Penance. TV journalist Oonagh O’Neil can certainly be irritating, there’s no denying that. She frequently comes over as spoilt, self-absorbed and occasionally even arrogant, but she’s also gutsy, tenacious and very real.

When an elderly priest dies in a Glasgow church during Holy Communion, his death isn’t much of a surprise, but when a large amount of penicillin is discovered in his system, things take a more sinister turn as Father Kennedy was known to be allergic to it. His fellow priest, Father Tom Findlay, isn’t happy when the police come around asking questions, especially as he’s recently been caught in a very compromising position in a car with a man and has secrets of his own to keep. He’s losing faith in both himself and the church, but is effectively blackmailed into staying, as his superiors know he’s been dipping into church funds to pay the journalist who’s been blackmailing him.

Oonagh O’Neil isn’t having a very good time, either. She’s pregnant by her boyfriend, but unfortunately he’s married and most certainly doesn’t want her to keep the baby. Oonagh’s situation is made even more poignant as she has been working on an exposé of a very real skeleton in the Catholic church’s cupboard, the Magdalene Institute, responsible for keeping unmarried, pregnant women in a state akin to slavery and all too reminiscent of the Victorian workhouses, with their babies being taken from them and sold without their consent, in return for cash donations.

The Magdalene Institute is a barely fictionalised account of the now infamous Magdalene Laundries (or Asylums) in which women were kept in appalling conditions and forcibly parted from their babies, many of whom they never saw again. On February 19 2013, the Irish Taoiseach Enda Kenny issued a formal apology, describing the laundries as ‘the nation’s shame’, but in 2000, when Penance is set, that statement was still 13 years in the future, and the Catholic church’s iniquities were only starting to come to the surface.

When Oonagh’s life comes under threat, her friend DI Alec Davies is left trying to make sense of what’s going on, whilst still investigating Father Kennedy’s death. Surrounded by lies on all sides, and saddled with a garrulous graduate-entry partner, it’s no wonder the poor guy is heading for an ulcer. His laconic wit provides some humour as a much-needed counterweight to the very real horrors lying beneath the surface.

Penance is a searing look at the dark truth that the Catholic church fought hard to keep under wraps. It makes uncomfortable reading. And it’s also vivid, painful, well-characterised and wholly absorbing.