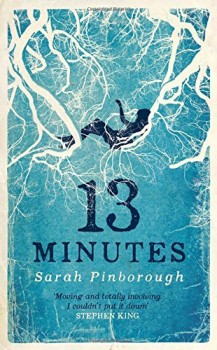 Teenager Natasha dies for 13 minutes after a plunge into an icy river. No one, not even Natasha, knows what she was doing in the woods at night or how she ended up in the water.

Sixteen-year-old Natasha is dead when she’s pulled from an icy river by a man out walking his dog early one morning and she stays dead for 13 crucial minutes. Thirteen minutes that strip away her memory of what she was doing in the woods at night and how she ended up in the river.

Her school friends cluster around her in hospital, glad that she’s alive. Or at least that’s how it seems. But a series of texts between best friends Hayley and Jenny reveal that not everything in the garden is as rosy as everyone appears to think. In the close-knit group of envied and popular girls, dubbed the Barbies, there are tensions that run deep, and as Natasha’s memories start to return, the cracks between the girls begin to widen.

Rebecca – Becca or Bex to her friends – knows what it’s like to be used and then cast aside by Natasha. They were once best friends, or so Becca thought. But when Hayley and Jenny came on the scene, Becca found herself sidelined. Now, her only friend at school is shy, awkward Hannah, the sort of girl no one notices. And although Becca has a boyfriend, 19-year-old Aiden who works with musician Jamie McMahon, the man who saved Natasha’s life, she’s still jealous and needy, looking back bitterly on the days when she was Natasha’s best friend forever.

13 Minutes is a penetrating look at the pleasure and pain of the ever-shifting sands of teenage friendships – best friends one minute, cool and distant the next. These teenagers are certainly not all apple pie and kittens. They smoke, take drugs and have sex. They also come over as utterly real. These are the girls you’ve seen hanging around the local coffee bars, furiously tapping away on their mobile phones.

Sarah Pinborough tells the story of Natasha’s near-drowning from a variety of different points of view. There are transcripts from sessions with a psychiatrist, extracts from the diary Natasha has been told to keep in an attempt to stimulate her lost memories, text conversations and police statements. The point of view in text alternates from Natasha to Becca, with some passages from others including Jamie McMahon who does his best to stand by Aiden, Becca’s boyfriend, when a second death in the icy river Ribble turns the police’s attention onto him as he struggles to account for his movements on the night Natasha died.

Two thirds of the way through the book, it looked like everything had been wrapped up, and at that stage I wondered where Pinborough could take the story next, but it soon became clear that there was plenty of mileage left in 13 Minutes. With the exception of poor, side-lined Hannah, few of the protagonists in this tangled story of how deep but fickle teenage friendships can be come over as particularly likeable, but despite that, I quickly became immersed in their lives and loves, finishing the book in two sittings. This story of how young friends are made and broken is tense, raw and at times almost unbearably painful, but it’s always engrossing and will resonate with anyone who still remembers their own teenage years or is living through them at the moment.