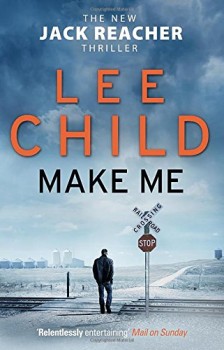 Jack Reacher gets off a train in the middle of the Oklahoma prairie, and finds more than he bargained for in the strangely watchful town of Mother’s Rest.

Make Me is veteran thriller writer Lee Child’s 20th Jack Reacher book. I came quite late to the series, but soon developed something of a fascination for the tall, laconic man who travels with nothing more than a toothbrush in his pocket, wearing the same set of clothes until he purchases new ones, leaving his old ones behind to be disposed of. As quirks go, it’s certainly different, but it does tend to leave me counting the number of days he goes before changing his underwear!

In Make Me, Reacher is, as usual, going nowhere in a hurry, so when he sees the name Mother’s Rest in the middle of the seemingly endless wheat fields of Oklahoma, he decides to break his journey for the night and investigate. The town isn’t exactly welcoming, but he finds a motel and spends some time walking around, looking for a small museum, or maybe a lone memorial to the eponymous mother. No one he asks seems to know the origin of the name, and Reacher starts to get the distinct impression that strangers asking questions are not exactly welcome around there.

Over a meal in the town’s only diner, Reacher gets into conversation with a woman he’s seen meeting the daily train, as though she was expecting someone who never came. Michelle Chang is a former FBI agent turned private investigator, and she’s come to Mother’s Rest at the request of a colleague who wanted back-up, but neglected to say why. Keever, the man she’s come to meet, has disappeared without trace.

Reacher, who falls into trouble as easily and naturally as breathing, decides to hang around a while longer, his interest as piqued by the woman’s story as by the town’s name. Neither mystery is easy to solve, as Reacher and Chang have to delve deeply into a town full of people who make it abundantly clear they’re not welcome, and then even more deeply into the murky recesses of the so-called Deep Web, the part of the world wide web that can’t be reached by standard search engines.

As this is a Jack Reacher book, naturally there’s intrigue and violence in equal parts and, for once, Reacher isn’t invulnerable. The action is described in clinical, detached detail that at times makes the violence seem almost frozen in time, slowed to a crawl as Reacher calculates every move before making it. It’s fascinating to follow, although sometimes it does seem to drag a little. In opposition to this technique, the dialogue is crisp and natural, with minimal use of speech tags.

As Reacher and Chang delve ever more deeply into the mystery of Mother’s Rest, I found the book harder and harder to put down, even thought for much of the story not very much happens. But despite that, Child tells a great story, and the explanation, when it finally comes, is chilling in the extreme. Make Me will keep you guessing almost to the end, and is another very strong outing for one of the most popular protagonists in thriller writing.

And for those who’re interested, I think on one occasion Reacher went four days without changing his underpants, but despite that, still found a woman who was willing to go to bed with him!