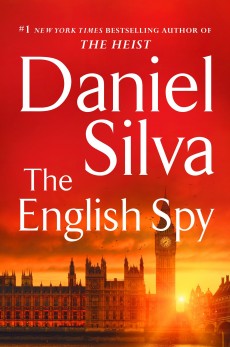 A terrorist plants a bomb on a luxury motor yacht, killing all on board including a popular princess of the British Royal Family. MI5 turns for help to Gabriel Allon of the Israeli Intelligence Services.

This is Daniel Silva’s 15th novel featuring Gabriel Allon, an Israeli Intelligence officer. Almost inevitably, there are frequent references to characters who feature and events that occur in previous novels. Whilst it is helpful to be familiar with these, it is not essential and to the new reader the book will appear complete in itself.

The opening pages, in which we are introduced to a mystery man, are intriguing and soon become intensely dramatic when it is revealed what his purpose is. The casual way in which he kills an innocent young woman is shocking and serves to convince the reader of the rightness of the MI5 view that he must be eliminated at all costs.

That, however, is no easy task, even when Allon has the assistance of a former member of the SAS, now turned professional assassin. The problem is that the man they are seeking, Aemon Quinn, is highly intelligent and quite unscrupulous.

When he realizes that he is being pursued he sets in motion a complex plot designed to lure Allon to his death. He is all too aware of the danger that Allon and Keller represent and shows himself to be just as devious and intuitive as they are. It is not immediately obvious to them that, instead of simply going on the run, he is actively making complex arrangements to eliminate his pursuers.

Allon is much closer in the way he works to George Smiley than James Bond. In fact, the Allon-Quinn duel is very reminiscent of Smiley versus Karla. Both for Allon and Quinn it is very much a question of anticipating what the other will do next and making counter-plans. Various characters are introduced, including two women from Allon’s past, who are clearly going to be important. However, the author manages very skilfully to conceal their purpose until the last minute, leaving the reader to guess what part they are to play in the story.

The action is extremely wide-ranging and moves from one location to another at almost bewildering speed. Allon and Keeler try desperately to keep up with their prey – a desperation that is reflected in the large number of brief scenes, each of which brings with it some new crisis. Eventually we find ourselves in the ‘bandit country’ of Northern Ireland – a territory with which both Quinn and Keeler are all too familiar. Up to this point the book has excited the curiosity of the reader but what happens in the former haunts of the Provisional IRA takes him on an exhilarating and breathless ride as the two sides confront each other.

The four main characters – Allon, Keeler, Quinn and Seymour, the head of MI5 – are all presented in detail and with great care and show evidence of the considerable amount of research the writer must have undertaken in order to make them exist so convincingly in their roles. Nor does Silva ignore the minor characters. In particular, the reader finds himself deeply involved in the fate of the two Russians, Katerina and Madeline. Even more impressive is the way in which the research is seamlessly introduced.