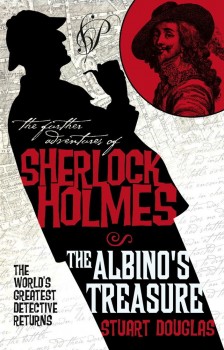 The Further Adventures of Sherlock Holmes - The Albino's Treasure

Holmes and Watson are asked to investigate the vandalising of a picture at the National Portrait Gallery and are sucked into a morass of politics, crime and killings.

This is way above the average Sherlock revival – it’s another from Titan’s money-spinning Further Adventures series and probably the best so far. In fact it’s so good that at times it’s quite difficult to tell where Stuart Douglas leaves off and the shadow of Conan Doyle takes over it’s so true to style, plot and language!

Douglas avoids all the usual pitfalls. Many Holmes re-creators try to say something profound about either character or canon, to make their story fit a social message, or just become involved with unbelievable plots. This clever story confines its ambitions to being entertaining – Doyle’s work stood the test of mass circulation serialisation – and succeeds brilliantly.

Holmes and Watson are asked to investigate the vandalising of an historic picture at the newly-opened National Portrait Gallery which Scotland Yard feels may be the opening move in a campaign by Fenian Home Rule activists aimed at the English establishment – and possibly even involving a threat to the safety of Queen Victoria.

From that point it follows all the classical high points of any Sherlock adventure – disguise, deduction, danger, escape, the bluff Watson’s concern for his brilliant but obsessive friend, the good doctor’s own ability to be distracted by a flashing smile or well-turned ankle, all set against an authentic late Victorian background.

There’s the usual secret, in this case one which could possibly have profound affects on a country in social turmoil, a master criminal brain – in fact two, both wanting the secret for their own ends – and a surprising and shocking denouement. In other words, everything you would want and expect from a Sherlock Holmes mystery: adventure, excitement, enjoyment, intrigue and superb prose.

After its slowish start, the story swiftly gains momentum as the disparate elements come together. The idea of Holmes caught in a struggle between rival villains could easily have been a gimmick which backfired, but actually works well with those elements largely contributing to the background of what is both a simple and complicated plot.

Whether you’re a Holmes fan or not – and the author clearly is – this is a good, fast-paced action adventure in a realistic setting and well worth a read!