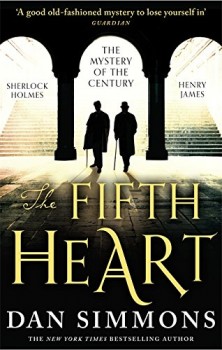 Sherlock Holmes, under cover following his alleged death at Reichenbach Falls, prevents American author Henry James from committing suicide and enlists him to investigate a suicide and a plot to destablise the United States.

Arthur Conan Doyle would probably be quite honoured that an established writer like Dan Simmons had joined the ever-growing Holmes-repro industry, but I’m not too sure he’d be awfully happy with the product.

For a start, it’s about 100 pages too long. Simmons seems so fascinated by his research that it’s inflicted on the reader at enormous length to the detriment of the narrative. Nor would Conan Doyle be impressed with the view of several of the characters that he was little more than the editor of Dr John Watson’s rough versions of Holmes’ adventures. And Simmons’ habit of pointing up Doyle’s inconsistencies – such as how Watson’s Afghan war wound moves around his body or how his wives names’ change – would hardly endear him to the master.

The book is a strange mix of adventure, historical fiction and metafiction, delivered at a pace which demands both stamina and concentration. American writer Henry James – Turn Of The Screw, The Bostonians and Portrait Of A Lady – is depressed by a failing career and the recent death of his sister. He is about to commit suicide in Paris, but is stopped by Holmes, who he has met before in London, and virtually hijacked into going to America with him as Holmes investigates the alleged suicide of James’ friend Clover Adams.

Despite Watson’s published belief that Holmes had perished in his final clash with the arch criminal Moriarty at Reichenbach Falls, the master detective is very much alive, but staying out of the public eye while he assesses his life and experiments with new drugs of choice, graduating from opium to morphine to heroin. James becomes on some level a Watson substitute as Holmes not only investigates the alleged suicide, but also a plot, sparked by Moriarty, for mass assassinations to spread panic and anarchy, starting with President Grover Cleveland, who is preparing to open the 1893 World Fair in Chicago.

Simmons drags in a clutch of historical characters such as the historian Henry Adams – Clover’s husband – Teddy Roosevelt, Mark Twain, John Hay and others, not to mention fictional ones such as Hercule Poirot, into what at times becomes a story of rich peoples’ manners and mannerisms much like some of James’ books.

Mixed in with all this is Holmes’ existentialist doubts as to his own reality – is he real or just a character, various shifts in the point of view of the narrative, apparently direct interventions by Simmons, and the unlikely appearance of Holmes’ son by his one-time love interest Irene Adler, who is a young assassin!

All this pseudo-metaphysical stuff, with characters so self-aware, rather fails because they are forced to remain surprisingly productive and un-neurotic to progress this pot boiler of a story. Simmons even allows a degree of self-mockery with characters referring to badly-written but entertaining mystery-thrillers – perhaps they read early proofs of this!

This book, like its characters, is very aware of itself to the point of pretentiousness. On the whole Sir Arthur, I feel would not be impressed. As for Sherlock and his worries, the best advice is probably to change his dealer!