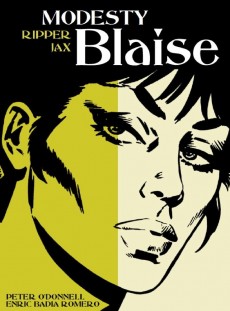 Four more adventures for Modesty Blaise and Willie Garvin, brought to life on the page by artist Enric Romero.

It feels like I’ve been reading Peter O’Donnell’s Modesty Blaise books and cartoon strips all my life, and I think it’s fair to say that for me, nothing touches them for adventure, action, adventure and characterisation. I started off in my teens by devouring the books and, once I’d galloped through the back catalogue, I eagerly awaited each new one as they appeared. I even managed to lay my hands on some of the original comic strips.

When Titan Books started to put the stories together as graphic novels, I leaped on them as well, soon learning the different styles of several very different artists. I even managed to acquire some compilations that at the time were only available in the US. The latest in the series from Titan contains four stories written by O’Donnell and drawn by the bold, striking pen of Enric Romero, who excels at bringing Modesty’s dark beauty to life.

In Ripper Jax, Modesty and Willie are called on to rescue the daughter of an old friend, and travel to Ireland, going up against an antagonist who believes his knife skills surpass even Willie’s mastery of the blade. Pride usually does go before a fall but, as ever with this pair, it’s not what happens but how it happens that’s important. In a typical O’Donnell twist, nothing is quite what it seems, and the story builds to a rather bittersweet conclusion.

The Maori Contract opens with Willie in New Zealand, helping a friend construct a Maori war canoe. Jason is Sir Gerald Tarrant’s nephew, but this time the trouble doesn’t stem from anything connected to the wily old spymaster; instead, it affects Jason’s wife Carol. Sir Gerald travels out from England with Modesty to break some surprising news but trouble is never far away, and Modesty and Willie end up having to call on some surprising allies to win the day.

Morality is very much the order of the day in Honeygun, where Modesty is called on to repay an old debt from her days as the boss of the criminal organisation, The Network. There’s a wonderful glimpse of the old days here, when Modesty calls for volunteers to break up a distasteful racket. Years later, the female assassin, Honeygun, calls in her due, and Modesty’s strict personal code of honour is thrown sharply into focus.

Friendship is an overarching theme in all O’Donnell’s books, and it’s never more evident than when the Colliers are involved. Mathematician and investigator of psychic phenomena Steve Collier is a former boyfriend of Modesty’s, while blind Dinah, who has an extraordinary ability to locate things, is a former lover of Willie’s. Strong ties bind all four of them, with a welcome lack of any form of jealousy on anyone’s part. Modesty and Willie would walk barefoot through fire for any of their friends, but Dinah and Steve are special, so in the story entitled Durango, when they’re kidnapped by a ruthless group of South American guerrillas, the pair come running, even if it means sticking their heads into the lion’s mouth with no back-up.

The latest compilation from Titan Books contains plenty of thrills and spills, with welcome insights into Modesty’s past, as well glimpses into her private life, with occasional boyfriend, billionaire John Dall making an appearance, as well as the eccentric Doctor Giles Pennyfeather, who’s engaging and infuriating in equal measure.

Romero’s art is always a joy. He captures emotion and action with an enviable economy of line. In his hands, the women are beautiful and the men are hunky. My only slight criticism of his style is that his men have a slight tendency towards uniformity. Based on the books, I always imagine both Giles and Steve as somewhat less ripped and bulky than they appear in Romero’s drawings, but this is very much a matter of personal taste, and might well come down to the fact that I’d already formed strong impressions of these characters in my mind before I saw them brought to life by pen and ink.

As Simon Barnes’ introduction makes clear, Modesty is very much not just a female James Bond – she’s far more than that. If I had to choose any fictional character to get me out of a tight spot, without a shadow of a doubt, I’d choose Modesty Blaise.