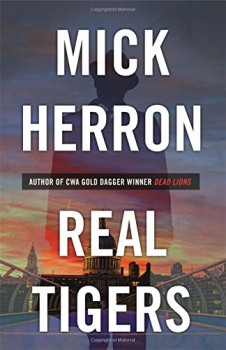 Catherine Standish, one of the out of favour MI5 officers based in Slough House, is kidnapped by a former soldier out for revenge. Jackson Lamb, the head of Slough House, is determined to free her.

This is the Mick Herron’s third novel in the Slough House series. Perhaps the first point to be made is that it is not necessary to have any knowledge of the previous two books before coming to this one. We are made aware that the occupants of the building are disgraced spies for whom Slough House is a form of exile. The work they are required to undertake is deliberately boring and more often than not totally unnecessary. It is the intention of their masters in Regents Park to convince them to leave the service, but they do not want actually to dismiss them. It soon becomes obvious that they are by no means stupid people and that they are where they are as a result of some mistake in their career.

In addition to the inhabitants of Slough House, the main characters are Dame Ingrid Tearney, the head of the service, and Diana – ‘Lady Di’ – Taverner, who wants to be head of the service. The two women clearly loathe each other – a fact that Herron conveys superbly by having them behave towards each other with a studied politeness. There is somebody else who wants to run the intelligence service – Peter Judd, the Home Secretary, within whose department the intelligence service is included. He wants to control it as part of his career plan to become Prime Minister. There is a deliberate similarity to the popular side of Boris Johnson in his portrayal. This political angle is at the very core of the novel and we learn a lot about these three characters.

There are two new inhabitants of Slough House – Marcus, who has a gambling problem, and Shirley, who is too fond of sniffing cocaine. However, when the chips are down the ‘slow horses’, as they are known, join in very effectively with the rest of the crew. Jackson Lamb, the head of Slough House, himself conceals a fierce loyalty to his subordinates beneath language that expresses total contempt for all of them. The only person who can come near him in this respect is Shirley, whose witticisms, like his, are frequently indecent. Roderick Ho is the typical computer nerd, totally ineffective except when sitting in front of a screen. The other three inmates of Slough House, River, Louisa and the kidnapped Catherine, are almost normal by comparison, but extremely well drawn.

These characters are so convincing and their individual traits so interesting to the reader that they make up for what is not always a particularly convincing plot. Obviously, Herron is very cynical about politics and politicians and believes that they can never be trusted to mean what they say. The three examples in this novel do not appear to have any precise agenda, but they are aware that it would be useful to them in some way to undermine their rivals. What this means is that, whilst the reader accepts the underlying motivation for their actions, the specific reasons for those actions are not always immediately clear. In other words, the politicians seem just a little too clever, even for politicians.

During the last part of the book one of them, driven to desperate measures, tries to prevent what threatens to be a career-ending discovery. What had appeared to be the leisurely telling of a story suddenly becomes an out and out thriller as four of the Slough House regulars battle for their lives. The action at this point is so hectic that Louisa is driven to ask, “Remind me whose side we’re on.”

It is impossible not to be impressed by Herron’s use of language. He is able to express himself so neatly and frequently presents the reader with epigrammatic comments. He describes Staffordshire, for example, as one of those counties that only exist to prevent gaps on the map. Peter Judd is said to be pleased with himself – his factory setting. River Cartwright, as he steps into Regents Park Headquarters, feels a little as if he were entering the marital home after a divorce.

This wit and verbal dexterity tend to enliven what is sometimes a rather overwritten plot. Another stylistic device is the use of contemporary references – Assange, Snowden and Boris bikes - which gives a very modern feeling to what is a thoroughly entertaining tale.