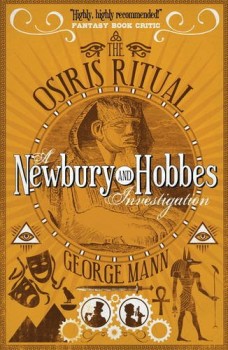 An ancient mummy, a mysterious secret agent and magician's trick all combine in the second adventure in the Newbury and Hobbes series.

The Osiris Ritual is the second book in the Newbury and Hobbes series. The books feature the adventures of Sir Maurice Newbury (a private investigator who also works as an agent for Queen Victoria) and his assistant, Veronica Hobbes. They are all set in an alternate version of London which features steampunk elements mixed with hints of the occult and a revised timeline where Queen Victoria is still alive in 1902.

This book opens up with Sir Maurice attending the unveiling of some ancient mummified remains brought back by the explorer, Lord Henry Winthrop. He is unsettled by what he sees and soon finds himself investigating the murder of Winthrop. He's also given the task of meeting an undercover agent named Caspian who has returned to England from Russia under mysterious circumstances. He soon finds out that this is a more complicated case given what has happened to that agent.

Meanwhile, Veronica Hobbes begins investigating a case where young girls have been going missing after volunteering to be part of an illusion in a magician's stage show. The three plot lines alternate throughout the book but eventually interweave together.

The Osiris Ritual can be read as a standalone adventure but there are also mentions of previous cases which should hopefully encourage readers to seek out some of the other books in the series. The last few chapters begin to set things in motion for the next book, The Immorality Engine (my personal favourite in the whole series).

I think the steampunk element works well and doesn't feel too overdone. Things like the body modifications of certain characters or the steam-powered airships seem to fit seamlessly into the world the writer has created, a world full of detail and imagination. I love the descriptions of certain scenes and the writer manages to use language appropriate to that period without it lapsing into parody.

The characters may be the familiar types of crime fiction (such as the troubled detective or the eager young journalist) but the setting manages to make them seem fresh and interesting. The steampunk setting may not be to everyone's taste but if you're looking for a different take on detective fiction then I think it's worth giving this book a try.

Jane Appleby lives in the North East of England where she works as a civil servant.