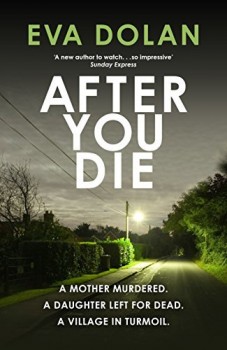 Peterborough Hate Crime cops DI Dushan Zigic and DS Mel Ferreira are out in the sticks this time after a woman is murdered and her disabled daughter left for dead.

Eva Dolan’s books, set in not so very idyllic Peterborough, feature the Hate Crimes Unit in the shape of the rather dour DI Dushan Zigic and his stroppy sidekick DS Mel Ferreira. This time, they’re out in the sticks, investigating the death of a disabled teenager.

Dawn Prentice had contacted police a year previously about a hate campaign focused on her disabled daughter Holly. Now Dawn is dead, stabbed to death in her kitchen, and Holly left to starve upstairs.

Both Zigic and Ferreira were injured last time out, the latter more seriously. She’s back at work, but struggling for fitness – and determined that no one should guess.

They’re faced with a selection of middle class neighbours, some stray tradesmen, and a wild card who brings Zigic into conflict with those above his head when he tries to work out the suspect’s possible involvement.

Dolan’s first two books were gritty, dark and felt like they’d jumped out of the newspaper headlines, with Peterborough’s varied immigrant community and dodgy politicians. After You Die moves out of the city – and immediately loses a great deal of atmosphere.

The book isn’t helped either by a fairly unmemorable cast, both among the police and the suspects. The snag with the victims being people you never get to meet is that you haven’t had chance to get to know them and to build up feelings either way for them. Holly, the teenager left disabled by a climbing accident, fares better than her mother, as Dolan really nails the tragedy of a super-fit girl reduced to a shell and raging against her plight. Otherwise, I had trouble keeping the other villagers straight in my mind, as they’re not really fleshed out.

Ferreira is the standout character by a mile, with her passion, drive and lousy taste in men. Zigic, by comparison, angsts about his family and really only bursts into life when he comes up against the establishment. Oddly, given the premise of the books, we’re shown little of how immigration has coloured their lives beyond occasional mentions of Ferreira’s disapproving parents.

It’s certainly not a bad book, but it raises the old chestnut of how authors keep a running series fresh. Hate Crimes is a unique selling point and a wide field – and Dolan finds a strong social media angle in After You Die. But the book lacks the energy, punch and grit of its predecessors.