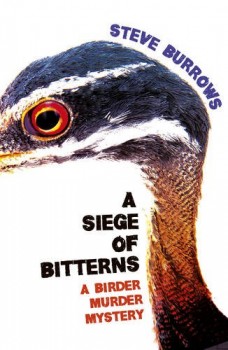 A Siege of Bitterns

Bird-watching cop Domenic Jejeune moves from Canada to Norfolk – and investigates skullduggery in the birding world.

A Siege of Bitterns introduces Chief Inspector Domenic Jejeune, a Canadian cop, who, following his love of birds – very definitely the feathered kind – transferred over to the UK, to the saltmarsh wetlands of Norfolk.

Unusually for a main character in crime fiction, he doesn’t seem to have a particularly tortured past, although there are frequent hints that he’s done something particularly special to have earned him poster boy status in the eyes of the media and the Home Secretary, but this is never made terribly explicit, and I could have done with more detail.

Naturally, there is soon a stack of skulduggery in the birding world, starting with what at first appears to be the suicide of a prominent TV personality and ecological activist (think a somewhat more suave Bill Oddie and you won’t go far wrong). Naturally this turns out to be murder.

It’s always nice to come across a new angle in crime fiction, and the bird one intrigued me enough to give this one a go. I certainly learned a fair amount more about birds and wetland environments than I did before, although there were times when the plot twisted and turned almost as much as some of the labyrinthine marsh creeks and was in danger of leaving me stranded.

Jejeune himself never quite lives up to his promise. We’re told he’s everyone’s golden boy, but unfortunately there’s a lot more tell than show, and what came over to me was a man who plays his cards very close to his chest, particularly where his own team is concerned – much to their frustration. He likes to follow hunches, but doesn’t seem to like explaining why.

More interesting by far to me was the character of Sergeant Danny Maik, a tough, down-to-earth ex-soldier who regards his new boss with a combination of interest and some suspicion. If the series continues, I’d like to see more of him.

If you have a particular interest in birds, then this one will be up your creek, and even if, like me, you just feed the sparrows and tits in your garden, there’s still plenty here to appeal. And, if you’re as much of a grammar pedant as your editors, you’ve got to admire a book where an important plot point turns on the proper use of capitalisation! Less admirable, however, is the frequent use of ‘gotten’ by characters who are very definitely British, not American or Canadian, and that’s something I would expect to have seen edited out. It’s jarring and unnecessary, particularly when Jejeune’s writer wife makes several scathing comments on the subject of grammar!

That aside, this is an entertaining visit to the Norfolk coast and a good introduction to the fascinating world of birders.