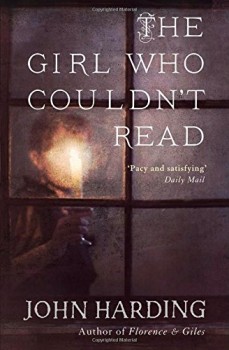 The Girl Who Couldn't Read

A man calling himself Dr John Shepherd arrives to take up a post at an isolated women’s mental hospital in New England and becomes involved with a young amnesiac who is fascinated by books, but cannot read.

John Harding’s sequel to Florence And Giles, his chilling and elegantly literary reworking of Henry James’ Turn Of The Screw is, guess what? Another beautifully written and sinister Gothic tale continuing the tradition of stories like The Woman In Black and The Fall of the House of Usher.

His great strength is that he does atmosphere – in spades! The story is simple enough, but Harding’s superbly taut management of a small cast and their surroundings builds up the mystery and suspense.

The story is set on an island off New England in the dying years of the 19th century. A man calling himself Dr John Shepherd arrives at an isolated women’s mental hospital to become assistant to the owner, the prissy and Pavlovian Dr Morgan.

While Shepherd is horrified by the conditions and treatment of the inmates – starkly and brutally described – he must also conceal a dark secret. But he soon finds the asylum has plenty of its own. Why is he banned from the hospital’s top floor? Why does the psychopathic chief nurse hate him? Who is the murderous woman who wanders the corridors at night?

Shepherd becomes intrigued by a strange, amnesiac girl who is fascinated by books, but who cannot read and persuades the dictatorial Morgan to allow him to start an experiment to help her. But while he tries to solve the mystery of her past, his own begins to catch up with him and soon she becomes his only hope of escape from the island, as he is hers.

Harding creates a wonderfully evocative picture of the stark and grim institution – gripped in the snow and ice of a New England winter to add to the chill factor.

His story has a true period feel and his style, often reminiscent of Edgar Alan Poe, transcends what is basically a simple tale with an inevitable and predictable denouement. The reader becomes so enthralled with the Shakespeare-loving and highly literate narrator’s progress and the horrors practised in the name of early psychiatry that the gradual revelation of his true nature comes as no surprise.

Neither does the very Poe-ish dictum that the female is far more deadly than the male! Don’t be put off by the critics’ billing of this as some highbrow literary thriller. Harding is spare and concise in his choice of words and his graceful, but urgent style not only builds tension, but also absolutely forces you to read on.

And don’t worry if you haven’t read the previous book. This thriller of the highest order works perfectly well as a standalone. It is a gripping read from cover to cover.