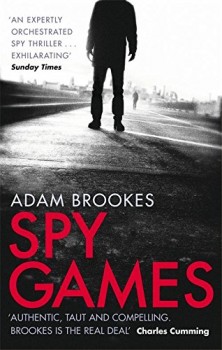 A powerful element within the Chinese administration approaches the British Secret Intelligence Service for reasons initially unclear: involvement could be dangerous, but it offers tremendous opportunities.

Journalist Philip Mangan is in Addis Ababa, intentionally distant from China where he was involved in an SIS operation that went spectacularly adrift. His profile is clearly not low enough, however; he is contacted by a Chinese man offering classified information, and gets the go-ahead from SIS. The content of what is supplied suggests high-level access, and his SIS bosses see wonderful possibilities for exploitation.

In parallel we are given hints about a rift between a couple of big wheels in the PRC leadership dating back to the Cultural Revolution, a hatred which has only grown over the intervening 50 years, during which time the principals have both become the heads of powerful families. The latest scions of the two clans, Fan Kaikai and Madeline Chen, are both at Oxford enjoying lives of wealth and privilege, but as the dispute comes to a head, neither will escape unscathed.

This is a follow-up to Brookes’ Night Heron and maintains the excellent standard of its predecessor. There is action from the first page and the excitement of the final chapters makes the book very difficult to put down. All the many different locations visited are persuasively depicted, and Ethiopia in particular is described with such detail that authenticity is hard to dispute.

As with Night Heron, there is plenty of what Le Carre termed ‘tradecraft’ to delight fans of the spy genre. ‘Peanut’ and the formidable Eileen Poon show up in brief but memorable scenes. Trish Patterson reappears as Mangan’s handler, a woman of considerable skills but unfortunately vestiges of conscience, something not necessarily advantageous to her career advancement.

Mangan and Patterson are in fact the central focus of the story. Patterson, superbly skilled, is the consummate agent but for her concern for the people she is asked to manipulate. Mangan is just a man on the street pulled into something he is not trained for, and is easy to identify with. Despite the occasional misstep, however, he proves to have a natural bent for the work of an agent.

In contrast to the human concerns of Patterson and Mangan, the preoccupations of the SIS hierarchy once again prove to be real politic and factional one-upmanship. They are drawn as career-driven, cold and supercilious, with no more interest in the lives under their gaze than one would have for a pawn in a game of chess. The picture is only too convincing.

While Le Carre’s name is overused, he has to be the touchstone for spy novels, and Brookes’ stuff stands up well to the comparison. The techniques and situations of espionage are plausibly described, but behind all that is a story of people whose motivations Brookes makes entirely understandable. Wrapped up within a gripping thriller, the package is irresistible. The only question is - how long will I have to wait for a sequel?