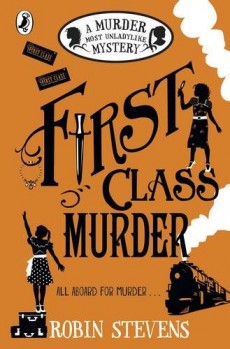 A year after the publication of The Murder on the Orient Express in 1934, the young members of the Detective Society follow in the illustrious footsteps of Hercule Poirot by taking the same trip in the company of Hazel’s father, Mr Wong. He makes it absolutely clear to both girls that there is to be no unladylike behaviour, by which he means definitely no detecting.

But when one of the passengers in the first class accommodation is found with her throat slit in a classic locked-room mystery, there’s no way the girls are going to be left out. After all, as Daisy is fond of pointing out, they have already solved two murders, and been given detective badges!

In the third of Robin Steven’s entertaining Murder Most Unladylike series, her young detectives face their hardest case yet. There are plenty of suspects to choose from. The victim, Mrs Georgiana Daunt, was wearing an expensive diamond necklace that the eccentric Russian Countess Demidovskoy had very publically laid claim to as a family heirloom and, naturally, the necklace was not found on the murder victim.

To add to the list of suspects, there’s also the famous magician, the flamboyant Il Mysterioso, who would be more than capable of pulling off a locked-room trick, plus Madame Melinda, who claims to be able to talk to spirits, something Mrs Daunt’s overbearing husband William thoroughly disapproved of.  He also disapproves of his wife’s brother, a writer who claims that the notes found in his bunkroom were just the plot of his next book. And as if a murder wasn’t enough to contend with, it also seems that there’s a spy hidden amongst the passengers.

Stevens’ young detectives make an engaging pair. Daisy is headstrong and determined not to let anything stand in her way. Hazel is the quiet one, thinking things through carefully, but appearances can be deceptive, and even though Hazel hates disobeying her strict father’s instructions, she’s not prepared to stand by and let the adults mess things up. After all, she’s a detective, too.

First Class Murder perfectly evokes the feel of Agatha Christie’s classic crime mysteries and builds into a very clever whodunit, complete with the obligatory crop of cunningly disguised red herrings that did a good job of keeping me guessing all the way through. There’s also a slightly darker feel in places, as the unfolding political situation in Europe starts to cast a long shadow.

This is a series that’s very definitely found its feet. I liked Hazel and Daisy when I first met them in Murder Most Unladylike, and Robin Stevens is doing a great job of deepening their characters and showing how their experiences are shaping the two girls, and even changing the perceptions of those around them.