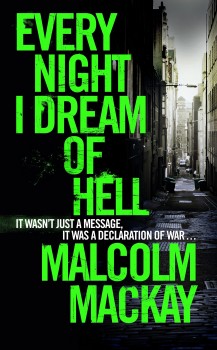 Every Night I Dream Of Hell

With its boss in prison, hard man Nate Colgan is named ‘security consultant’ to the Jamieson criminal empire, his job to track down an outside challenge and deal with internal power bids.

It’s taken me five meticulously plotted, powerful, brutal and brilliant stories to work out what is wrong with Mackay’s portrayal of Glasgow’s gangland. His fault – and also his greatest strength – is that his cast of unlovely villains actually speak recognisable English and the dialogue is sharp, uninflected and almost devoid of idiom.

Add the fact that his characters hardly swear and you wonder if these lean, mean, but totalling compelling sagas can really be set in Scotland’s sprawling second city? Yet this near abstract approach is what gives the stories their power, has garnered the man from the Outer Hebrides a fistful of awards, and swiftly established him in the top rank of modern crime writers.

Gang boss Peter Jamieson and his right hand man John Young are occupying separate wings of Barlinie jail, but are determined to retain control of the complex criminal organisation they have created. Jamieson’s empire is departmentally structured, with underbosses controlling drugs, prostitution, fraud, loan sharking and other crimes and he is determined to ensure there is no destructive struggle for supremacy in his absence.

On the outside, Nate Colgan, who featured briefly in earlier stories as a classic hard man enforcer, is named ‘security consultant’ to investigate an apparent challenge by a newly arrived English gang. Colgan, a classical anti-hero who narrates most of the story, is essentially hired muscle. But, as so often with real life gangsters, he’s intelligent and articulate. By his own admission – and some graphically described action – he is a coldly professional and brutally terrifying creature of violence.

His first-person narrative, with occasional jumps to the viewpoints of other characters, has all the elements of a police procedural as he investigates suspicions that the ‘invaders’ may be acting for, or with assistance from, someone within the organisation making their own bid for power.

For all his deserved reputation, Colgan is not totally amoral. His relationship with his nine-year-old daughter who lives with her grandparents and her beautiful, but dangerous, criminal mother, shows another side to his character.

Nothing is simple in an underworld of swirling mistrust and shifting alliances and Colgan finds himself being used by both sides – even forced into a temporary alliance with a detective obsessed with destroying the Jamiesons – before his own blunt skills can force a solution.

The absorbing and well-paced narrative flows easily. This tightly plotted story, with its emphasis on reasoning and morality rather than all-out action – also a feature of Mackay’s earlier books – concentrates effectively on a narrow series of events and characters to deliver a tense and gritty drama.

Don’t worry if you’re new to the scene. This is a near perfect one-off read with a self-contained plot. The infrequent references to events in other books make it a good introduction to Mackay’s cruel, but compelling world of crime. Once you’re in, you’ll be hooked!