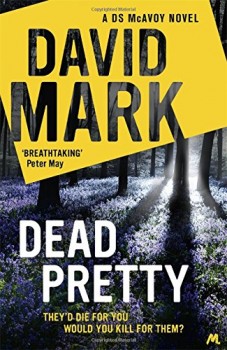 One girl is missing, another dead. DS Aector McAvoy of the Humberside Serious and Organised Crime Unit can’t let the memory of either go.

David Mark, a former Yorkshire Post crime writer, leans heavily on local knowledge and experience. He is one of the darkest of the new crime writing faces, and his stories of the giant Highlander, intensely moral and often naive Detective Sergeant Aector McAvoy and his colleagues in Humberside’s Serious and Organised Crime Unit are influenced by cases he covered, the defeatist and jaded officers, the competent and incompetent, the inertia of the system and the effects on those touched by savagery and tragedy.

McAvoy is a 21st century George Dixon – a man of huge decency struggling with his own conscience as much as the brutality and evil he must face. Some terrific characters, many like the superb Superintendent Trish Pharaoh and his wife Roisin, reappear in this latest story, proving once again that Mark can portray compelling and believable female protagonists.

This bleak cross between a procedural and serial murder thriller offers an original and intriguing story which goes beyond mere prurience, but some may find the plot  disappointingly formulaic – a vigilante killer, dead girls, a nick-of-time climax.

It’s just a little too improbable and there’s a shade too much of everything. The gangland hitmen appear a south London version of the homosexual killers Mr Wint and Mr Kidd from the Bond film Diamonds Are Forever and some of the motivation of both villains – and police – would take a psychiatrist to unravel.

Then there’s the setting. I couldn’t relate Mark’s Humberside police to reality. Recently, Her Majesty’s Inspectorate of Constabulary rated it the only ‘inadequate’ force in England and Wales and a further survey showed it to have the lowest officer morale in the country.

This is not a story for the faint-hearted. Much of the narrative is both degrading and incredibly violent. PC it isn’t! Many characters are realistically foul-mouthed and foul-minded and feminists will find the treatment of women misogynistic. Mark’s bleak portrayal of the port city of Hull makes it sound like a place to drive through quickly, where deprivation, vice and violence appear the norm.

But for all that, it is a intriguing, clever, superbly written, fast-paced and well-researched book which ticks all the boxes for a modern crime thriller. The flaws of its characters make them believable, if often totally unlikeable, but above all compelling.

McAvoy, with his conscience, his devotion to family, colleagues and justice and the often aggressive, but determined and talented Pharoah, who is battling her own demons and the shortcomings of her service as much as the criminals, provide moral lodestars in a sea of failure, injustice and violence.

It’s tough, it’s brutal. But if you have a stomach strong enough to stand it, this is another big stepping stone in to bringing Mark the success his invention and talent deserve.