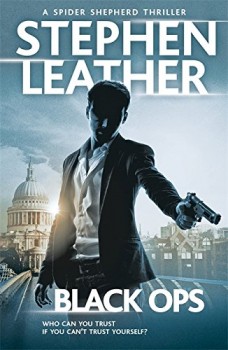 Dan ‘Spider’ Shepherd goes undercover again, this time posing as an assassin willing to take on a contract to assassinate the Russian president.

Dan ‘Spider’ Shepherd is back, and as usual, the action gallops off at a good pace right from the start. Spider is engaged on a counter-terrorism surveillance operation, but things go distinctly off-piste and, to save lives, he has to take down a couple of machete-wielding terrorists at a tube station.

Not long afterwards, Spider is summoned to his son’s boarding school to discover that Liam has been caught in possession of a considerable quantity of cocaine and, unfortunately for his future prospects, the school has a zero tolerance policy when it comes to drugs. No amount of pleading by Spider will get the head teacher to change his mind.

The copper in charge of the case, a fast-track graduate entry sergeant who’d never dream of drinking on duty, is equally resistant to Spider’s charms. It’s made clear to Spider that unless he can dish the dirt on the sharks much further up that particular food chain, Liam is going to get charged with possession with intent to deal, which will put rather a damper on his future prospects.

At the same time, Spider has to go undercover posing as an elite assassin being asked to do a very high profile job for the father of one of the victims of the Malaysian air crash in the Ukraine. The target? Vladimir Putin on a visit to the UK.

Entwined with all this is a third story strand, following Spider’s friend, the assassin Lex Harper, currently working off the books for Spider’s M15 controller, Charlotte Button, in a bid to bring down two Irish terrorists. But it turns out that Harper isn’t the only one who’s been operating on the wrong side of the tracks.

Spider is approached by the smoothly irritating Jeremy Willoughby-Brown, Button’s opposite number at M16 and ordered to spy on Button, who’s thought to have turned rogue and been using her position to take revenge on those she believes to have been behind the death of her husband. To say Spider’s unhappy at the prospect of turning on his own boss is putting it mildly, but when he’s given a direct order by the Director General of M15, Spider doesn’t think he has much choice in the matter, despite the depth of his loyalty to Button.

In Black Ops, Spider is forced to confront his own past as well as other people’s, and Lex Harper has a few distinctly unpalatable truths to ram home to him as part of that process. Everyone has their secrets, but it turns out that not all secrets are as deeply buried as their respective owners might hope.

The action is as tautly written as ever, but there are a few clunky passages that turn into a bit of a ‘tell not show’ particularly when Spider is asked to prove his credentials as an assassin, which he does by seeming to do nothing more than recite chunks of Wikipedia! That’s about the only misstep, though, in a very serviceable thriller, that builds well on past events, whilst still being accessible to new readers, no mean feat in a series that’s now comfortably into double figures.