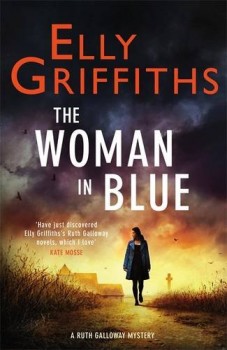 The Woman in Blue

It’s almost Easter and pilgrims are due in the small Norfolk town of Walsingham. Except, two women have been murdered and female priests are the targets of poison-pen letters.

I seem to be flagging when it comes to a lot of long-running series – and the exceptions are the blessed Phil Rickman and Elly Griffiths. It strikes me that writing character-driven books, rich on regional atmosphere and with a healthy dollop of history and woo-woo, is more than likely to keep your readership well hooked.

On the face of it, Griffiths’ books don’t vary a lot. They’re set in East Anglia, there’s an archaeological angle and the characters have the most complicated love lives outside of an episode of Eastenders.

But what makes this series such a draw is that you can absolutely imagine knowing the people who sprawl across the pages – even Cathbad the Druid (trust me on this, I used to live near Avebury!) And Ruth Galloway the central character, oozes authenticity.

Ruth is a perfectly ordinary woman who you can imagine working with. She angsts about her private life and her weight, but these never overwhelm the book. And she’s a highly-professional archaeologist who lectures in a university and helps out the police on occasions.

Which is how she came to meet glum DCI Harry Nelson, ostensibly happily married to a glamorous hairdresser. Except, Ruth’s daughter Kate is the result of a fleeting affair. And Harry’s Catholic guilt means he loves his wife and daughters, but can’t let go of seeing Ruth and Kate.

Speaking of Catholic guilt, religion and the small town of Walsingham take centre stage this time. It kicks off with Cathbad, house-sitting for a friend, seeing a vision of the Virgin Mary in a blue cloak and white gown. As you do. But then a woman wearing a blue dressing gown is found dead in a ditch the next day.

Ruth, meanwhile, is contacted by an old university friend. Hilary Smithson is now a priest, and has been receiving threatening letters. These target women priests and contain an ominous line about a woman in blue, weeping for the world. And then another woman is found dead – this time a priest.

Ruth’s an atheist and cursed with born-again parents, so she stays well away from religion as a rule. And she’s managed to avoid Walsingham during her time in Norfolk, but the town is preparing for its annual crucifixion re-enactment, and there’s this killer on the loose as well as the poison-pen letter writer …

As always with Griffiths, the plot is ship-shape. But I don’t read the books for the beauty of her plotting – just so long as the storyline doesn’t leak, I’m happy. The Woman in Blue isn’t the strongest in the series, but it never feels like Ruth is trying to solve the murders single-handed – she’s more keen to take a back seat and to persuade Hilary to hand over the letters to Nelson and his team.

It’s the eclectic cast who are the real gems here and the strongest reason to grab the first book in the series and get to know Ruth and her motley friends.