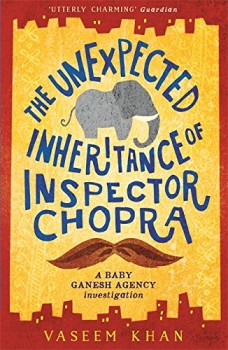 The Unexpected Inheritance of Inspector Chopra

On his final day at work, Inspector Chopra receives a report of a suspicious death. He also inherits a baby elephant.

After 30-something years of service with the Mumbai police, Inspector Chopra has been forced into early retirement. He is persuaded that the suspicious drowning of Santosh, a young man, in inches of water, is no longer his concern but when it is clear his successor will take no action, becomes determined to follow up.

Life in retirement is unlikely to be restful. His wife Poppy is suspicious about the phone calls Chopra has been receiving from a woman, and his mother-in-law who lives with them is a shrill old harridan. Things only get worse when an eight-month old elephant arrives, care of his Uncle Bansi. Ganesha, however, is something rather special.

This whimsical tale is full of the sights and smells of Mumbai, possibly a great deal easier to read about than experience first-hand. Temperatures in the 40s, torrential monsoon rains bringing scores of deaths, open sewers and public defecation, the air a choking swirl of dust, and pi-dogs and pigs rooting in fetid piles of rubbish. But it’s not boring, and Chopra views his home with a good deal of affection.

Chopra takes a different view about the corruption which infests the city. The accusation by the mother of the dead boy that the police care only about the rich stings Chopra into action, despite his lack of official standing. He soon finds that questions about Santosh make people nervous, and before long comes into contact with some very nasty villains. One of these proves to be an old foe thought to be long dead, and another someone he thought a friend.

That Chopra survives his brush with the heavies is largely down to Ganesha, who gets the prize as the most endearing character. On arrival he is so distressed he is unable to eat, and it is only when Cadburys milk chocolate is offered that his appetite begins to recover. Nearly drowned in a monsoon, he is taken up to Chopra’s flat on the 15th floor to recover from a cold, where he proves to be the perfect foil for mother-in-law.

He also causes some distress to Mrs Subramanium, president of the flats managing committee, an over-zealous monitor of the building regulations. Ganesha provides fuel for her long-standing running battle with Poppy, who is reconciled to the prospect of an elephant in her home only because of the irritation this will give her antagonist. Poppy and Ganesha settle down for an afternoon watching soaps on TV and snacking on banana chips.

Given the humour with which Chopra’s investigations are surrounded, it is not giving too much away to say that Chopra survives, and ends the book reconciled with Poppy, equipped to pursue a new career as a PI, and with Ganesha installed in a more suitable home.