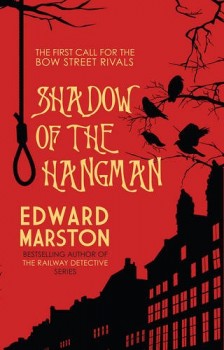 Shadow of The Hangman

I’m ashamed to say I’ve never read a book by prolific author and past Crime Writers’ Association chairman Edward Marston before. The creator of the Railway Detective series, plus Bracewell, Captain Rawson and the Restoration novels, launches a new series of historical hokum with a pair of identical twins as his thief-taking protagonists.

Peter and Paul Skillen may be visually indistinguishable, but there similarity ends. It’s all rather like Sir Percy Blakeney meets Brett Maverick, with Peter, upright, sober, patriotic, married to the lovely and intelligent Charlotte and Paul an impulsive, drinking, gambling, womaniser.

Shadow of the Hangman is set in the second decade of the 19th century, where the twins have built an enviable reputation as thief-takers, so much so that they have incurred the ire of London’s proto-police force, the Bow Street Runners. But their success has brought them to the notice of Henry Addington, Viscount Sidmouth, the former Prime Minister and now Home Secretary. He has used Peter before as a spy in France during the Napoleonic wars and turns to the twins when a cleaner at the Home Office mysteriously disappears.

At the same time Sidmouth is threatened with assassination by two American naval prisoners of war who have escaped a massacre during a riot at the brutal Dartmoor prison. And a group of French spies plan a spectacular revenge for the end of the Napoleonic dream with his defeat and imprisonment following the decisive battle of Waterloo.

Got the idea? There’s bags of plots, bags of action, colourful characters, plenty of humour  – and all in a credible historical setting. It may seem churlish, but do the Skillens have a backstory? They are obviously gentlemen, but apart from the rewards for catching criminals, how do they survive? Much like a Sherlock double act, they cut through crime like a knife through butter, aided by a pair of Dr Watsons in the shape of a shooting gallery owner and his assistant.

But how did they gain their skills? And does Marston ever intend to get serious enough to deal with the results of their work? In 1815 the penalty for many quite minor offences was the rope of the title  – and Sidmouth was just beginning his ruthless and efficient crackdown on civil dissent and revolutionary activity.

Never mind. It’s a cracking tale, ideal for something to relax with one afternoon. I’ll leave the serious stuff to the historians and look forward to the next adventures of the dashing double act!