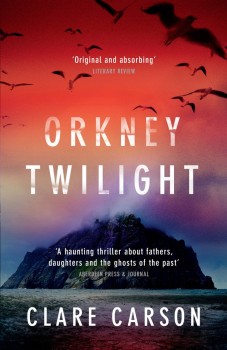 Jim is a great storyteller, whose stories get wilder with each glass of whisky. Teenage daughter Sam tries to find out the truth about her undercover cop dad.

Carson’s own father was an undercover detective. How much of her own teenage frustration over not being able to talk about his job, even perhaps wondering if it served any useful purpose, has gone into the character of Sam is difficult to guess.

Sam is a typical middle class girl of the period. She’s rebellious, pot-smoking, pro-CND and direct action – and largely anti-establishment. She is also aggressively intelligent and has won a scholarship to Oxford’s elite Brasenose College, alma mater for so many British Prime Ministers – and home of the notorious Bullingdon Club!

Dad Jim, a former soldier turned cop, is a great storyteller and his tales get wilder with every glass of whisky! Semi-detached from his lecturer wife, he tries to be a good father to his three daughters when he is around, which is not often, but he is prone to moodiness, withdrawal and much given to cryptic references to his job.

This well-drawn father-daughter relationship is the real heart of the story and as Sam learns the truth of her father’s dark past, so her relationship and respect for him grows. When Jim announces he is going to Orkney to take time to consider his future in the police, Sam’s mother asks her to go along to keep an eye on him. The family had once shared special and magical holidays on the island and Sam, waiting to go up to Oxford, agrees and invites a would-be journalist friend to join them.

The descriptions of the haunting beauty of Orkney at the time of the midnight sun, its wildlife and beautiful, but remorselessly remote background, are almost lyrical. This is almost a book of two halves – Sam and her friend snooping and spying in Orkney appears to offer more questions than answers and lulls the reader almost into a sense of security.

But with their return to London, the pace picks up, leading them both into the dangerous and murky waters of unfinished police business and political wrongdoing and races to a terrifying and shocking finale as Sam discovers the truth both about her father and herself.

The crime plot is well planned and executed and there are a lot of interesting layers, but this clever exploration of a young woman’s anger and resentment in a relationship with a father she clearly adores, strained by the isolation of his job, is the key to it all.

Carson’s unique style is reflected in the character of Sam, smart, slick and funny in places. Orkney Twilight is an evocative tale, full of references to Norse mythology and with some superb scene setting. It is a bold and compelling first novel. It appears in parts so personal you wonder whether she can repeat such an interesting, explosive and successful mix.