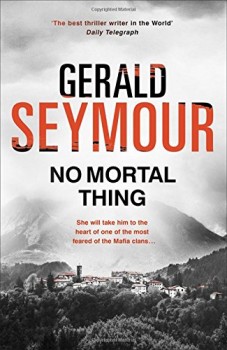 A young Englishman, holding a prominent position in an investment bank in Berlin, decides to intervene when he sees a young girl being attacked in the street – an action that has huge consequences.

Everybody has heard of the Mafia. It became famous initially not in its country of origin – Italy – but in the United States. On14th November 1957, the FBI launched a surprise raid on the house of a notorious criminal in Apalachin, New York State and interrupted a meeting of about a hundred important crime bosses from all over the country.

After this there was no doubting the existence of a phenomenon long suspected but never proved – the American Mafia. Later, the history of organized crime in Italy itself became better known, particularly the Camorra of Naples, the Cosa Nostra, based on Sicily and the Calabrian ‘Ndrangheta. The plot of this novel involves one family which is part of the last of these.

Bernardo Cancello, a 76-year-old grandfather, is the head of his family. Both his sons, who might have taken over his responsibilities, are behind bars, subject to the 41-bis regime, designed for the worst type of criminal, allowing them no contact with other prisoners and virtually none with the outside word. The remainder of his family comprises his wife, a daughter and a grandson, intended to be next in the line of succession. There is also a daughter-in-law. Once there were two but one betrayed the family’s honour and suffered dire consequences.

Bernardo’s position as head of the family is under threat because he is being sought by the ROS, the branch of the Carabinieri that co-ordinates action against organised crime. As a result he is obliged to be a prisoner in his own house and to hide in a specially constructed underground chamber. There are Carabinieri watchers on the hillside but an informer has indicated to Bernardo that they will soon be removed for financial reasons.

The grandson, Marcantonio, has been sent to Berlin with a view to learning how to launder money and also to identify and evaluate potential investments. He cannot, however, resist the temptation to run his own little protection racket and does it so clumsily that he becomes involved in an incident that has far-reaching consequences. Jago Browne, a young and successful investment banker, is drawn into the same incident which in his case is life-changing.

The Mafia is, of course, a secret organisation and we cannot be certain that the picture of a ‘Ndrangheta family presented in this novel is entirely accurate but Seymour appears to have made excellent use of his research and manages to make it very convincing.

Although Bernardo has become many times a millionaire, it is not so much the money as a desire for power that motivates him. Closely associated with this is the emphasis on ‘honour’ and ‘respect’ which he feels to be his due. It is difficult to believe that words can hold such different meanings from those traditionally given to them.

‘Honour’ for Bernardo is entirely to do with self-assertion and pride and requires complete subservience from those below him. ’Respect’ is merely another name for fear and those obliged to pay it are always aware that their lives are dependent upon the whim of another.

Nor is it merely the poor who are obliged to pay this ‘respect’. Even Bernardo’s grandson – next in line as head of the family – dare not disobey his grandfather and we see the results of this in the totally callous murders he is quite willing to carry out. The strongest impression this book makes is of a society which, whilst part of a supposedly modern Western Europe, is medieval in its attitudes and thinking.

In other ways, however, the book is less successful. Seymour’s writing generally has plot aplenty and he always takes care to make it credible. In this novel, however, not a great deal happens – unless we count the daily hanging out of a considerable amount of the Cancello household’s washing. The watchers watch, Bernardo hides and it is only towards the end that anything begins to happen in the Aspromonte massif.

There is a similar lack of attention to the characters. Bernardo aside, they are not particularly interesting – something of which the author himself seems to be aware as they appear simply to fade away at the end of the novel. Nor is the motivation very clear. It is possible to understand how Jago initially became involved with a Mafia family but his subsequent behaviour is obsessive and not in the least convincing. Consolata, previously fully engaged in handing out anti-Mafia pamphlets, is somehow so taken by Jago that – for reasons she cannot explain – she suddenly becomes committed to his crusade. Two other characters - a German policeman and an English customs officer - play no useful part at all and could well have been omitted completely.

This is unusual because a Seymour novel is normally well plotted, with characters who seem to slot into it effortlessly. Here, however, one senses a certain tiredness about the writing and there are times when the temptation to give up, whilst not overwhelming, is nonetheless strong.