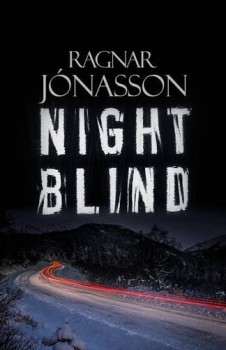 In a quiet fishing village in the northern tip of Iceland a police inspector is shot at close range. Ari Thór searches for the clues in the darkness of a long cold winter and in people’s memories.

Nightblind, the second book published in English of the Dark Iceland series, follows Ari Thór, five years after the events in Snowblind. And again nobody does dark icy claustrophobia and isolation, and yearning for belonging like Ragnar Jónasson…

The quiet, close-knit community in Siglufjörður, the most northerly small fishing town, is overshadowed by a huge mountain. Heavy layers of snow and complete darkness descend each long winter. And soon a killer is on the loose in the freezing never-ending darkness.

On a cold night the confident policeman Inspector Herjólfur is shot at point-blank range outside an abandoned house. He ventured there on a tip off of drug-related activity. Young, moody, insecure Ari Thór Arason is called to the crime scene. He’s struggling both psychologically and mentally, from lingering flu and increasing feeling of loneliness, despite living with his girlfriend Kristin and his eight-month-old son Stefnir. And he still resents having been overlooked for the promotion, after working at this police station for several years.

While Ari Thór deals with the aftermath of the shooting, more questions than clues appear, especially as he is helped by his previous boss Tomas, who moved to Reykjavik following the shooting of his predecessor. It is unclear who is in charge of the investigation, and equally unclear is the involvement of various shady characters.

Thrown into the uncomfortable mix are recent newcomers to the town: a new mayor and his protégé, a mysterious woman Elin, both of a verge of starting an affair. The mayor’s family moved to Norway and Elin’s decision to take a job comes from running away from something. Or someone. And these people are involved in some shady politics, as much as the locals whose dealings under the cover of darkness, quietness and conventions result in shocking revelations. Because somewhere in the background of history a patient, held against his will in a psychiatric hospital, tells his story in a diary.

Ari Thór doesn’t know how to deal with his heavy personal baggage. Nightblind is a story about loneliness, about family secrets that people are ashamed to share, and the desire to feel safe.

It is an inspired translation by Quentin Bates whose deep understanding of Iceland and its culture, sensitively brings alive the restrained prose and heart-breaking words. Jónasson’s writing is a masterful reinvention of the Golden Age classic style, both contemporary and timeless.

However, I find his depiction of human emotions most appealing. Domestic violence and past crimes, hidden from the memory and consciousness, are enclosed by the poetic beauty of the location. There is also unbearable sadness in the ending.