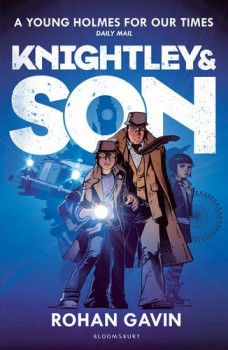 Private detective team, Knightley & Son are on the track of a sinister criminal organisation known as the Combination.

Four years ago, London private detective Alan Knightley fell into a mysterious coma and has been in Shrubwoods Hospice ever since. His 13-year-old son visits every week and spends their time together each week telling his unconscious father about old cases that he’s been re-examining in detail, because detail is what Darkus does best. He’s blessed – or maybe cursed – with a fly-trap mind for remembering facts. He’s ferociously intelligent and fiercely independent. He also has something of a fondness for tweed.

When Alan Knightley comes out of his coma with the same dramatic suddenness that he entered it, Darkus (I’ll make an exception this time for the unusual name and won’t rant about it) is delighted, but soon realises that having his father around again is at risk of cramping his style. His father was on the track of a mysterious and sinister criminal organisation known as the Combination and now that he’s awake, he intends to take up where he left off. And Darkus is equally determined to get in on the act, which is a good thing, as their next case will take all their combined brainpower to solve.

All around London, previously law-abiding ordinary people are suddenly committing seemingly random criminal acts, including robbing banks. The only linking factor that Darkus can find is that they all seem to have read a best-selling self-improvement book.

Darkus Knightley is clever, resourceful and nice, and I’m not using that word in any sense of damning with faint praise. He’s genuinely nice, even though he does take a bit of convincing to let his stepsister in on the act. But Tilly is every bit as determined and resourceful as Darkus. She’s certain her mother’s death was no accident, and she intends to get even with the people responsible. As her mother was Alan Knightley’s assistant, Tilly believes there’s a possible connection to the Combination and isn’t prepared to stand on the sidelines while Darkus does all the work.

Knightley & Son is fast and fun, falling at the younger end of the young adult spectrum. Darkus would be in good company with Simon Mason’s Garvie Smith, Kevin Brook’s Travis Delaney, and Peter Jay Black’s Urban Outlaws team, to name but a few. There’s a stack of great crime and thrillers for teens and young adults, and Rohan Gavin’s debut is an excellent addition to the ranks.