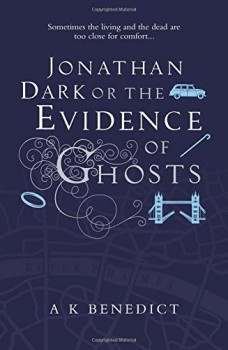 Jonathan Dark or the Evidence of Ghosts

Maria King receives a chilling proposal of marriage from a stalker. DI Jonathan Dark failed to save the killer’s first victim, but he’s determined to keep Maria alive.

Maria King, born blind, has had an operation to restore her sight, but wishes she’d kept that particular genie very firmly in the bottle. She prefers to stick to the London she knows so well by touch, sound and smell, spending her spare time mudlarking on the banks of the Thames, feeling around with her fingertips for treasures revealed by the waters.

Maria has an entire room in her flat devoted to her finds, all carefully catalogued, but what she isn’t expecting to come across is a ring in a box. The ring itself might not be a wholly unusual find, but the fact that it’s still attached to a finger definitely marks it as out of the ordinary, as does the fact that there’s a marriage proposal in Braille on the lid.

DI Jonathan Dark is a man haunted by his past failures, in particular, his inability to save a woman from a stalker. Like most fictional policemen, Dark isn’t exactly a run-of-the-mill bloke. His marriage has broken up in the time-honoured tradition of acrimony, and he has the ability to see things that other people can’t. But none of that was enough to save Tanya, and he’s now certain that Maria King is being stalked by the same killer.

I’m not quite sure what I was expecting when I opened this book. The title had fostered vague expectations of something possibly Holmesian. I certainly wasn’t expecting a cross-dressing London copper who can see ghosts, although the clue, to be fair, was there in the title; I just hadn’t taken it literally.

I’m not generally keen on books written in the present tense, but I’m extremely glad I persevered in this instance, as AK Benedict tells a damn good story, with fresh, interesting characters in a genre that is stuffed to the gills with dysfunctional coppers, all seemingly vying with each other for who can have the most tortured past. Believe me, that gets old very fast. But Benedict has a light touch with that side of things, and the fact that Dark occasionally likes to wear nail varnish and a dress is by no means his defining characteristic.

Benedict also has a very sure touch when handling the supernatural aspects of the story. I was well and truly hooked by the idea of a ghost driving a London taxi, and the simple domesticity of a man still living with his dead wife is extremely poignant. Jonathan Dark bears absolutely no resemblance to Peter Grant, but for subtle world-building, Benedict easily holds her own in the company of Ben Aaronovitch, and her hidden London is every bit as intriguing as the one he depicts.

If you like a dash of the supernatural with your police procedural, then Jonathan Dark is definitely the cop for you. Benedict’s writing is lyrical, subtle and enticing and never predictable. The same is also true of her characters.