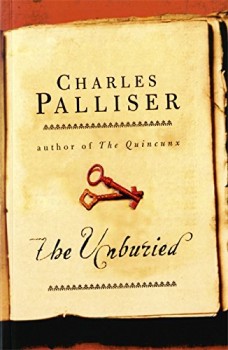 Academic Dr Edward Courtine visits a former college friend with whom he had lost touch, but becomes involves in a 200-year-old murder mystery  – and a very modern killing.

Charles Palliser was probably born at least 100 years too late. He understands the Victorian novel like no other modern author and can reproduce the style at will.

If his story of adventure and intrigue The Quincunx brought the normally sedate genre out of the drawing room almost at the gallop, this gloomy Gothic tour de force puts it firmly, but gently, back. And that’s no mere metaphor. Much of the story is set indoors, usually by a fire, and involves conversations over a decent glass of wine or port. Nothing happens in a hurry and the style is as discursive as that of Dickens.

But there’s more than a touch of a more modern master in Umberto Eco in the way Palliser builds an atmosphere of gloom and general spookiness and leads the reader through a maze of unexpected and often dead-end paths. In what appears at first glance little more than a ghost story, where gaslights, fog, architecture and landscape become almost characters in their own right, the principal narrator is academic Dr Edward Courtine, who is visiting a cathedral city to see a former college friend with whom he had lost touch.

But the real purpose of his visit is to search for a lost manuscript about the life of Alfred the Great, which could win him academic renown and a Cambridge Chair in Medieval History.  His search is so all-consuming he misses what the reader can see quite clearly. His former friend and the other people he meets act as if they had something to hide. That’s about the last time you will see anything clearly!

Courtine becomes drawn in to a debate over the details of a murder in the cathedral two centuries earlier, a ghost, unexpected twists, red herrings and false clues. At this point, you’ll wonder what to make of it all. Then Courtine finds himself a key witness to the murder of the city’s biggest banker.

What’s the focal point? The murder or the centuries old mystery, a story retold in different versions several times?

Unless you have paid unbroken attention, by now you’ll be at a total loss. Stick with it, as in its rather stately and slow Victorian fashion, the story takes Courtine on a personal journey and addresses old wounds, becoming a sensitive examination of things that internally haunt even a man who considers himself balanced and logical.

The Unburied is a beautifully constructed and thoughtful story written with meticulous care and detail. Palliser handles some fairly unsavoury subjects with the delicacy of allusion, rather than the modern ‘let it all hang out’ bravado, in what is a clever and intelligent book for intelligent readers.