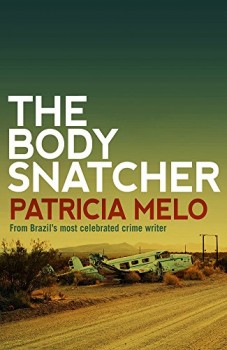 A man out fishing is the sole witness to a plane crash, and relieves the dead pilot of his watch, his phone, and a kilo of cocaine.

This story is told by a man, never identified, recently relocated to Corumba in western Brazil, close to the Bolivian border. The chance acquisition of cocaine provides a financial opportunity, but an attempt to capitalise ends in disaster, with Bolivian drug-dealers threatening dire consequences if he doesn’t come up with hard cash.

The only way he can see to get himself and girlfriend Sulamita out of their difficulties and into a better life is to sell the body of the pilot, yet to be found, to his wealthy grieving parents. Sulamita is a policewoman and can help set up the plan, but her boyfriend is falling apart, and a successful conclusion to the scheme looks doubtful.

The first-person narration places the reader squarely in the place of the protagonist, who, while well-meaning, is easily led and ever preoccupied with his own predicament. His woes include a thoughtless slap in Sau Paulo, which lead to a suicide, his affair with Rita, the wife of his cousin Carlao who encouraged him to move in with them in Corumba, and his thoughtless employment of his friend Moacir to dispose of the drugs, with terrible results.

By the time the plan involving a cadaver is formulated, the hero’s head is in a mess. Rita is pregnant and claiming he is responsible. He has secured a job with the pilot’s parents as a driver and is witness to the mother’s distress at her inability to recover her son for burial. This resonates strongly, as his own father disappeared and the lack of certainty about his fate haunted both him and his own mother.

The narrator’s situation leads him to speculate on the nature of good and evil: ‘I finally understood that kindness is learned with great difficulty…we are born with evil ensconced within us like a dormant virus only waiting for the moment to emerge. Otherwise, how to explain …(how) two good people could act so horribly?’

The equation is easier to understand in the context of place; a land of extremes of wealth and no safety net for the poor, where corruption is endemic to both civil society and the judicial system, and no relief available from the enervating heat. But it is true in any society that good intentions butter no parsnips, as they say.

The writing is certainly good enough to create a believable picture, and the descent of the subject into a nightmare of betrayal of every decent impulse becomes increasingly fascinating. Despite the dark subject the book is full of vitality.