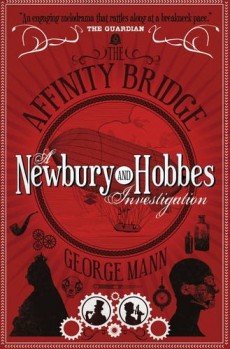 The dashing Sir Maurice Newbury and his unflappable assistant Miss Veronica Hobbes investigate the strange cases of a spectral policeman and an airship crash in a steampunk re-imagining of Victorian London.

The Newbury & Hobbes books have been on my reading list for a long time, thanks to the enthusiastic recommendation of a friend, so the discovery that Titan Books are re-issuing the series provided the perfect opportunity to finally push The Affinity Bridge to the top of the pile, and I certainly wasn’t disappointed.

In foggy, gas-lit London danger lurks in the shadows. The city is in the grip of a strange plague that turns people into shambling, flesh-eating revenants, their brains eaten away by the disease.

Against this background, the dashing Sir Maurice Newbury and his utterly unflappable assistant, Miss Veronica Hobbes, are asked to advise on the strange case of a spectral policeman who has been leaving bodies in his wake, much to the puzzlement of Sir Charles Bainbridge, a Chief Inspector at Scotland Yard. To make matters worse, the culprit is said to glow blue in the dark. Newbury remembers parallels with a case from some years ago, and his interest is distinctly piqued.

Their investigations are curtailed by fresh instructions from Newbury’s employer, none other than Queen Victoria herself. The monarch wishes him to get involved in the crash of an enormous airship, carrying passengers from London to Dublin, which came down on a London heath with no survivors. Newbury, fascinated by the giant craft that are now a daily sight in the sky above London, is only too happy to oblige.  Veronica Hobbes, despite only having worked for Newbury for a couple of weeks, has no intention of being kept on the fringes of the investigation and, despite the grim sight of the incinerated passengers, she’s determined to see the consequences of the crash for herself.

The discovery that the pilot of the airship was missing from the wreckage draws Newbury and Hobbes into the strange world of automata, mechanical men with punch-cards for brains, who are now piloting many of London’s airships, and could well take over many other jobs, as well.

George Mann’s gloriously steampunk re-imagining of Victorian London is filled with eccentric people and contraptions. Enormous steam-driven land trains rattle through the streets of the capital, Queen Victoria is kept alive by a primitive iron-lung and walking canes can turn into tasers. Sir Maurice Newbury is something of a cross between Sherlock Holmes and James Bond. With the former’s analytical mind and tendency towards substance abuse (in Newbury’s case, the laudanum that helps him sleep at night), and the latter’s ability to grapple with opponents on top of a moving train, Newbury is charming and ruthless, everything a steampunk hero should be.

By the same token, Veronica Hobbes is no shy, retiring lady. She’s straight out of the best tradition of the Victorian female explorers, and is no doubt capable of crossing entire continents with the aid of only an umbrella and a clean handkerchief. Together they make an extremely engaging pair of protagonists as they pick their way through dastardly plots and mortal danger. The Affinity Bridge is highly inventive and lavishly entertaining in equal measure.