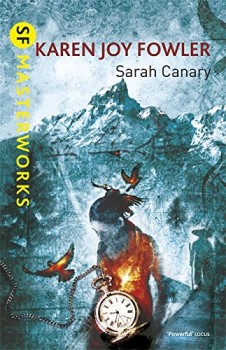 A mysterious white woman appears in a Chinese railway camp in the winter of 1873. Ordered by his uncle to return her to the white world, a young Chinese man begins a quest for right and good.

This may be the strangest book I’ve ever read. It’s almost impossible to categorise. Fantasy, historical fiction, magic reality, Wild West parody – it could be all, some or any one of the above!

I’m not even sure this is science fiction, although Fowler herself suggests that. Whether Sarah Canary, so named by one of the characters in this strange tale, is or is not an alien doesn’t actually matter; it is the magnetic effect she has on the lives of those she encounters and the way they come to understand themselves.

Why does homesick Chinese railway worker Chin Ah Kin risk his life over and again in pursuit of the ‘ugliest woman he could imagine’ who wanders into a railway workers’ camp? Is Sarah, the mute, misshapen object of his confused affections, an apparition, a shape-shifter, a murderess?

Chin is ordered to return her to the white people, but soon loses her. They are reunited in an insane asylum. Chin has fallen foul of frontier law and Sarah has been committed for observation. Their escape with another inmate – BJ, a beautifully drawn ‘sane’ madman – and embark on a series of misadventures which are by turns funny, moving or frankly terrifying.

Fowler arranges her characters and plot against a backdrop of some of the most salient, or ludicrous, events of 1873 America, allowing her plenty of scope to exercise her satiric wit. Her unsentimental view is refreshing, but she overstates her case, with the reader capable of seeing for themselves an unflattering reflection of the racism, exploitation and sexism of contemporary American society.

Apart from Chin and BJ, two others fall under Sarah’s strange spell – Harold, a huckster, who tries to exploit her in his travelling freak show, and Adelaide Dixon, a completely OTT early women’s libber. Each of the four main characters sees her as something different and their perceptions change their own lives. With no human characteristics other than her appearance, Sarah is a little more than blank page filled by the views of the other characters as they chase her across Washington fulfilling imagined or manufactured obligations to their construct.

She is perhaps an unclear metaphor, as much question as statement, and intensely annoying because you want to identify her, but like those she meets, you never will.

In many ways this odd, but compelling story may remind you of the much simpler The Wizard of Oz, which Fowler admits was an influence on her work – earnest characters grappling with a surreal landscape full of surprises and dangers.

It’s weird, it’s wonderful – and will make you think about your own perceptions. Sarah Canary is not a comfortable read or a book to be taken lightly.