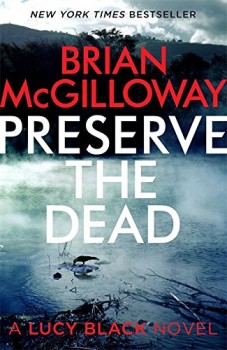 Detective Sergeant Lucy Black and her reformed alcoholic DI Tom Fleming become involved in a series of apparently unconnected events which eventually lead them to corruption and murder.

Lucy’s personal life is always present in the background, but never allowed to interfere with or overshadow the main story. As is often the case in procedurals, there are tensions in the police team, but these are handled with the lightest of touches.

McGilloway has far more heavyweight subjects to deal with – homelessness, alcoholism, exploitation of the poor and domestic abuse. Although the body count is relatively high, the murders are never over-dramatised.

The city itself, struggling in the collapse of the Celtic Tiger economy and trying to come to terms with its violent recent past, is as much a character as the humans who inhabit it.

This light touch focuses the reader’s mind on a brilliant procedural, which is far more about the who and why than petty personal problems or violence dressed up as entertainment.

Lucy’s father is in the city’s Gransha hospital, suffering the early stages of Alzheimer’s. He has been badly beaten – another issue raised but not proceeded with. Before she can investigate, a body is discovered in the River Foyle, which passes the unit.

She drags the corpse ashore – an old man, dressed as if for a funeral and dead before he entered the water. So dead, in fact, his body had already been embalmed! Who put him in the river and why? With this question swirling in her mind, Lucy heads home, only to become involved in a domestic abuse case when a neighbour asks for help because his wife’s sister has been badly beaten.

The following day a homeless man, apparently sleeping in a bin, is found in the compacter of a rubbish truck. It soon becomes apparent he had been beaten to the point of death before being dumped.

Lucy and her boss, the reformed alcoholic DI Tom Fleming, return to the case of the man in the river and discover someone was cremated in his place, but who? All they have is the ashes and some metal pins and plates. One from the skull has a cut indicating an axe blow to the head.

With an escalating series of mysteries on her hands, Lucy carries on digging and it appears the case of the homeless man and the unidentified cremation may be connected. To add to this chain of events which appear to have no rationale, Lucy and Fleming uncover a series of disappearances of homeless men, and Fleming’s friend and Alcoholics Anonymous mentor also goes missing. Eventually, the links between these apparently unconnected events become clear and build to an explosive finale.

The book is well plotted and entertaining, gradually unfolding as the links between the various threads are uncovered. Lucy, an intelligent and independent woman who has issues both with colleagues and her own complexes, is completely believable as a diligent officer trying to serve the public the best she can. Fleming, too, is an intensely human and realistic character, battling the stigma of his past problems.

If you like an intelligent police procedural with some very contemporary themes, you are bound to enjoy this thoughtful and fine piece of writing by an author who shuns sensationalism for authenticity.