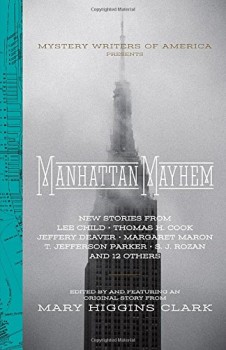 Seventeen short stories from members of the Mystery Writers of America to celebrate the organisation’s 70th anniversary.

Each of the 17 featured writers – all members of the Mystery Writers of America celebrating the organisation’s 70th anniversary – has created a crime story around a specific neighbourhood or public area of Manhattan Island. Some like Lee Child, Jeffrey Deaver and Clark herself, are well known and successful authors, others less so. But they all face the same problem.

Asking a novelist used to writing three or four hundred plus pages with time to develop characters and background to produce a short story of perhaps 30 is like asking a champion marathon runner to enter a 100metre sprint.

The transition is hardly easy and as a result the standard of writing is hardly uniform. There are some superb little tales – and one or two flops. Make up your own mind. That’s the beauty of this kind of book. You can dip into it at will and if you don’t like something, just turn a few pages and move on.

As a whole this is a very enjoyable read covering the Big Apple through different time periods and circumstances.  A selection of magnificent black and white photos of New York enhance the appeal of the stories, presenting the city as a magical and mysterious landscape.

My own favourites with locations were editor Clark’s Union Square: The Five Dollar Dress centred on a 40-year-old murder; Central Park: White Rabbit by Julie Hyzy, which mixes Alice in Wonderland with a trap to catch a killer; Times Square: Brenda DuBois’ clever tale of the aftermath of VJ day The Day After Victory; Little Italy: Me And Mikey, Jefferson Parker’s sad but believable story of a crime family; NJ Ayres’ Alphabet City: Life of Samuel Rabinowitz, and the delightful SJ Rozan tale of an elderly woman ‘helping’ her private detective daughter in China Town;

Quirky, suspense filled, humorous and all with completely different twists and turns, the sheer variety of these stories make this book a real joy to read.