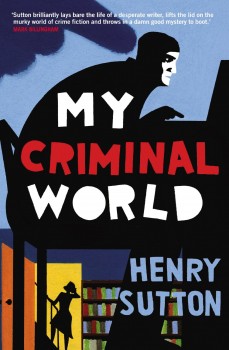 Crime writer David Slavitt is struggling to boost a flagging readership and to get to the bottom of his wife’s apparent alienation.

David Slavitt is a crime writer, with several published novels but a declining readership. His agent thinks that more deaths, preferably as gory as possible, would do a lot to redress the problem.

Meanwhile, things are not all well at home. His attractive academic wife Maggie seems distracted, and David is getting hints that her relationship with one of her PhD students is giving rise to talk. David and Maggie and their two young children relocated from London to the Norfolk coastal town of Kingsmouth, a move that was intended to enable a more relaxing lifestyle, but with the pressures on David and Maggie, family life is suffering. Things go from bad to worse when David’s connection with crime becomes something more than literary.

My Criminal World interleaves the ‘real life’ of David and his family with that of the story that David is writing, each with its own font to avoid confusion. The developments in the fiction to an extent reflect proceedings in David’s life, especially pressures from people in the trade to make his books more raw and bloody, with a view to boosting sales.

This is all very clever, and doubtless a truthful depiction of the crime-writer’s lot; the author has seven previous books published, so he doubtless knows what he is talking about. As with films about people making films, however, exposure of the workings tends to undermine the reader’s suspension of disbelief for the story, and the protagonist is never particularly sympathetic.

David’s story is, in truth, somewhat slow; he is a domestic creature who seems distracted much of the time and, surprisingly for a writer, has difficulty formulating his thoughts. His fiction, in contrast, is a bit too exciting to be credible. The chief villain, in charge of regeneration at the local council, has a sideline in the import and exploitation of women, and keeps up an impressive murder rate in addition. The head of the county’s major crime unit is a woman with a penchant for casual sex, and ends up acquiescing in the disposal of the body of her subordinate. One understands, of course, that this excess reflects the demands of his critics, and is meant to be ironic, but at the end of the day the joke is not a particularly funny one.

The tone of the book is light, however, and with uncertainties about what David and Maggie have really been up to unresolved until the final chapter, there is enough to keep the reader interested. The lack of horror and grisly detail presumably reflects Sutton’s belief that entertainment in crime novels don’t necessarily have to be all about shock and blood, a view heartily endorsed by this reviewer.