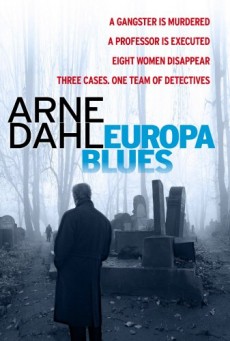 A gangster is eaten by wolverines in Stockholm Zoo. A celebrated professor is executed in the Jewish cemetery. Eight East European women from a refugee hostel disappear. The Intercrime Unit investigates how and why these cases might be connected.

Four different cases in four Stockholm locations have happened in a short space of time. The Intercrime Unit, known also as A-Unit and dedicated to solving international violent crime, investigate the possible links between the most unusual cases. The city is divided into four quadrants to allow the team to concentrate on and analyse the most confusing evidence.

A violent Greek gangster/pimp arrives in Stockholm on some sort of mission. He’s high on cocaine and wants to enjoy a peaceful evening. But instead he ends up in a wolverine enclosure of Skansen, a famous zoo, eaten by the animals. Paul Hjelm and Jorge Chavez try to understand what happened, based on nearly non-existing evidence: a finger, a piece of rope, and an unknown word ‘Epivu’ that the victim managed to write in the sand before dying. It appears that he was murdered.

Kerstin Holm and Sara Svenhagen search for eight East European women missing from the refugee centre outside the city. The disappearance of asylum seekers, suspected of having worked as prostitutes, takes a sinister turn as the reluctantly given information points to a widely spread violent sex industry.

The third case starts in the Jewish cemetery where an elderly professor Leonard Sheinkman is executed in the most horrendous way: hanging upside down, with a metal wire protruding from his temple. He is found near a grave bearing a word ‘Shtayf’ where an unidentified nose-less Jew had been buried. The numbers tattooed on Sheinkman’s arm leave no doubt about his terrible past. His diary written during the war reveals shocking experiences.

Finally a thief gets thrown onto the track of the oncoming train while trying to rob a ‘female ninja’, a mysterious woman who without hesitation kills and then vanishes without a trace.

Meanwhile in Tuscany Arto Söderstedt enjoys his new Italian life, having inherited money from his uncle, a war hero. Arto is blissfully happy with his wife and five children, but also feels a bit bored. So when a call from his boss Superintendent Jan-Olov Hultin comes, he is excited to go to Milan and meet the local police chief who ‘guides’ him into the crime warlord’s den. Zooming across Europe, between countries and history, Arto starts to uncover the most horrendous links between the Italian mafia boss Marco di Spinelli and the recent crimes in Sweden. Surprisingly he also learns more about his personal story. The past is extremely painful and almost unbearable.

The A-Unit, including Gunnar Nyberg and Viggo Norlander, is a strong team with individual skills and talents, determination and tenacity, as well as quirks and weaknesses which make a powerful combination to keep the group going. Although so much is happening, the complexity of the narration only adds to the richness of Europa Blues.

This intelligent thriller, expertly translated by Alice Menzies, and firmly set in the modern European history, the guilt and the nationalism, is without a doubt a further example of top Swedish Noir writing. Arne Dahl is a master of thrilling action, global plotting and pure literary quality.