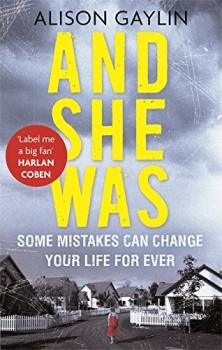 Brenna Spector is a PI with a condition that gives her an enhanced memory. She is hired to find the wife of a man called Nelson Wentz but runs into trouble when she finds her body.

Brenna Spector has an unusual condition which enables her to remember everything that happened on any given day in the past. Whilst this could be deemed an advantage to a private investigator such as Brenna, it also has its downside in that it can distract her from the present. She is hired to find the wife of Nelson Wentz, a citizen of a town called Tarry Ridge, the very town where Brenna grew up. So she is constantly reminded of her own past life including the day when her sister disappeared.

The memory condition is interesting but seems to overly complicate the story – indeed the book is decidedly hard to get into at the start. And throughout, the multi-layering is a complexity that at times appears to be unnecessary. The sections in italics might have been useful if they had been used consistently, but it was unclear whether or not these were Brenna’s memories and if so to which time period the memories related. Sections of the narrative that didn’t involve Brenna often had more pace and were easier to follow. In some ways this complexity certainly provided an insight into how difficult it must be to have the condition, but whether or not this story was an effective vehicle for this is questionable.

The structure of the story is fairly conventional and, towards the end a good degree of suspense is created. Unfortunately, this suspense seems to be the result of the incompetence of the main characters which may not have been the intention. There are also a number of non-sequiturs or oddities. For example, someone letting go of a hand which had not been held previously; a fight that is difficult to follow with two people impossibly lined up so that one bullet would pass through both of them; a man who “could have been twenty-five or fifteen or even five.” And there are sections when it is unclear which of the characters is talking.

There seems to be the beginnings of a team of investigators and law enforcement personnel with individual back stories and it seems likely that this is the start of another series. There is the basis of a good story here.