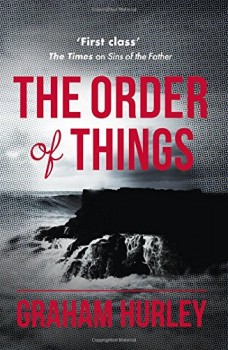 The Order of Things

A doctor has been found disembowelled in a cottage in a pretty Devon village – and the enquiry sets DS Jimmy Suttle on a collision course with his estranged journalist wife Lizzie.

Graham Hurley is one of the most reliable writers around – he rarely misses his step and you’re pretty sure you’ll get a well-told and engrossing tale from him. The Order of Things is no exception.

I’ve followed his books through from its days with bird-watching DI Joe Faraday on the mean streets of Portsmouth, through to the present series with DS Jimmy Suttle legging it down to Devon. And I’ll admit I was dubious about the spin-off to start with, as a good bit of the pull of the original books was the way Hurley absolutely nailed the city of Portsmouth.

The Order of Things has more or less cut all ties with Pompey, as Jimmy’s estranged wife Lizzie has moved to Exeter. Her book on the death of their daughter has been a runaway success and she’s spent some of the royalties on a quirky house that needs a ton of work doing on it – ironic when you recall how much she hated the tumbledown cottage Jimmy found when they first moved to Devon. And she’s back in the journalistic groove with an investigative website.

Hurley’s almost cinematic eye for a location has captured the rougher bits of Devon as well as the spectacular coastline and the pretty postcard villages. It’s in Lympstone, one of the latter, where a disembowelled body is found. It’s that of GP Harriet Reilly and the cottage belongs to her partner, Alois Bentner, a controversial climate scientist.

Lizzie, meanwhile, has found herself some good contacts in Devon. But when she starts digging into a story about a GP and mercy killings, her enquiries run headlong into those of Jimmy and his colleagues, because it’s the same Dr Reilly. And she disrupts Jimmy’s private life too, leaving him wondering if he’s as happy with sparky Irish nurse Oona as he thought he was. The book never descends into tiresome will he/won’t he, though – it all feels very real and raw.

Hurley focuses his plot in on a very topical and painful subject, helped by some spare, unflinching scenes that really hit home as Lizzie gathers her background information. He’s always been good at marshalling sprawling casts and peopling his books with unusual but convincing characters – and here he’s got some larger than life creations. Several of the scenes in country cottages and Lizzie’s new house are truly chilling.

This series really feels like it’s found its niche. And The Order of Things has niggled at my mind, long after I finished it. The book ends on one hell of a life-changing cliffhanger, leaving me muttering darkly about it being a year before I’ll find out what happens next. Hurley writes inch-perfect, matter-of-fact police procedurals, but he peoples them with an almost Dickensian cast that set the books way above most of his peers.