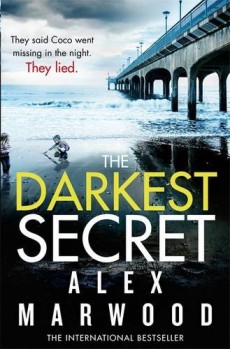 Three-year-old Coco Jackson disappeared from her family’s holiday home when the adults were out celebrating. Twelve years on, her father’s funeral brings hidden secrets into the open.

I’d heard good things about Alex Marwood and was rather looking forward to this book. All I can say is that if I hadn’t have been reviewing it, I wouldn’t have bothered finishing it.

I have problems with books where I don’t care in the least about any of the characters. And I have even more problems when I feel like I’m picking holes in the plot, and then going “meh, is that it?” at the final reveal, such as it is.

The plot of The Darkest Secret is straight from the newspaper headlines – which is fine, just so long as the writer does something different with the concept. Here we’ve got two strands, 12 years apart. Identical three-year-old twin Coco Jackson disappears from her family’s posh holiday home in Bournemouth during a 50th birthday party when all the adults are out celebrating and the children have been left home alone. Fast-forward to the funeral of her father Sean where there are ‘revelations.’ Or something.

I’ve said this before, but I will happily read books with unpleasant characters where the writer has made me care about them. After all, I’ve just spent the weekend re-reading a couple of Patricia Highsmith’s Ripley novels. But no one in The Darkest Hour, with the possible exception of older daughter Camilla, has anything to recommend them. This cast have got the lot – drink, drugs, greed, two-timing and just thoroughly obnoxious! Camilla at least has some spirit.

Psychological thrillers don’t necessarily need a police presence, but in this case their absence is odd, particularly in the older timeline. And there’s a lack of news-hungry journalists chasing the story, or people speculating wildly on social media. The latter is hinted at when Coco’s PR-savvy godmother carries out an email blitz, but it’s not followed through. Just think how much publicity the missing kids stories get, even years after their disappearance.

The book is slow to get going, as we’re faced with an information dump in the shape of witness statements. And it’s another case where I don’t think using the present tense does the flow of the story any favours. By the time I’d laboured through to the end, I wasn’t even faintly surprised by the reveal.

Marwood’s idea is a good one and has so many possibilities. And she can certainly capture characters who have you wrinkling your nose or rolling your eyes! Next time, though, I want to care about what happens to them.