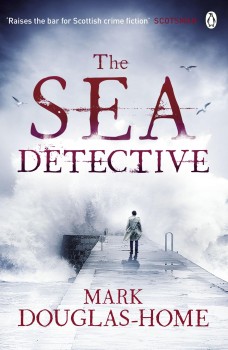 Oceanographer Cal McGill uses his specialist knowledge to investigate the mystery of two severed feet washed up in two completely different locations off the coast of Scotland.

It’s not easy to come up with an original idea, and especially not in crime fiction, where it often feels that everything has been done to death, usually by an alcoholic detective with a tortured past who all too often seems to be called Jack. But Mark Douglas-Home’s fascinating debut, The Sea Detective, has managed to come up with an unusual angle.

Cal McGill is an environmental activist and oceanographer who uses his specialist knowledge of currents, tides, prevailing winds and shipping patterns to investigate the flotsam and jetsam of the seas. That is when he’s not trying to raise awareness of climate change by breaking into politicians’ gardens and planting Dryas octopetala, a species of mountain plant that flourished around 13,000 years ago at the time of the last big freeze.

Much to DI David Ryan’s irritation, none of recipients are keen to be involved in a prosecution, and some of them even want to know if they can buy more for their rockeries, which doesn’t auger well for the chances of getting Cal into court. Ryan doesn’t like being made to look stupid, but he does have other fish to fry, namely the case of two severed feet, washed up at two entirely separate locations off the coast of Scotland.

Ryan’s not the only one interested in the case of the severed feet, and for Cal, it offers the opportunity to put his knowledge of the ocean into practice as he also takes an interest in the feet.

The Sea Detective takes a look below the surface at the cold, calculating world of people-trafficking, where underage girls are sold into sexual slavery, far from home, by their own families. It’s not a new topic in crime fiction, but Douglas-Home looks at it from a very different angle, exploring how the seemingly random locations for the severed feet actually make sense to someone who knows what to look for.

Interspersed with the fate of Basanti, a girl from India who ends up on the run far from home, is the story of Cal’s grandfather and a doomed fishing boat, pressed into military service in the Second World War. Cal has to delve deeply into the secrets and resentments of what is left of a remote island community after the loss of the majority of its menfolk.

Nothing is quite what it seems in The Sea Detective, other than DI Ryan, who’s only one step removed from the usual stereotype of a blundering, misogynistic copper who’s happy to take all of the credit and none of the blame, although that doesn’t work out too well for him in this instance. Douglas-Home is on surer ground with the more original creation of DC Helena Jamieson, who’s the very antithesis of a glamorous female cop.

One thing that Douglas-Home does need to get a grip on is his often wildly wavering point of view. It’s not unusual for the narrative to hop between the heads of various characters a bit like a rubber ball slamming around a squash court. But despite that, this is an assured debut, with a fascinating and original main character. The oceans are wide and deep with ever-shifting currents, and will no doubt provide plenty of mysteries needing Cal McGill’s very particular set of skills.