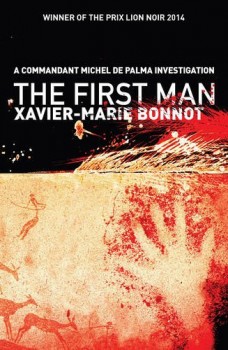 The mysterious and dangerous Le Guen’s Cave has claimed another life, this time an experienced diver who had been studying the cave paintings.

The mysterious and dangerous Le Guen’s Cave near Marseille claims another victim, an experienced diver who has been studying the Upper Palaeolithic paintings and engravings found ten years previously. The man gets into trouble resurfacing after a dive to a depth of 38 metres and has decompression problems. He’s not expected to survive for long.

Commandant Michel de Palma has history with Le Guen’s Cave going back ten years to its discovery. He’s nearing retirement now, but there’s something about Le Guen’s Cave that draws him inexorably back. He has the same history with the Autran twins, Thomas and Christine, accomplices in murder, both serving time in different prisons Thomas is a dangerous and brutal serial killer. His sister covered up for him. They haven’t communicated in years, but Christine’s prison term is nearly over.

When Thomas Autran escapes from prison and goes on the run, de Palma knows that it’s only a matter of time before Autran kills again. That knowledge draws de Palma back into the life of a man who’s haunted his thoughts for ten years, forcing him to look back into Autran’s family life and the strange case of a carved figurine of an antlered man stolen from an archaeological dig many years.

Cosquer Cave, found 30 years ago and named after its discoverer, Henri Cosquer, comes vividly to live in Xavier-Marie Bonnot’s capable hands as the fictional Le Guen’s cave. Rising sea levels since the days of the prehistoric artists mean that the cave is now only accessible to divers through a difficult and dangerous underwater tunnel around 175 metres in length. It’s claimed the lives of three divers, so there’s nothing far-fetched about the opening premise of The First Man, that of the death of another diver, but for hard-nosed and experienced de Palma, known to his colleagues as the Baron, it forces him to delve deeply into the tortured past of a man who once tried to kill him.

It’s hard at times not to feel some sympathy for the deeply deranged Autran, forced further into madness by the man who was meant to help keep his demons at bay rather than treating him as the subject of brutal experiments that only exacerbated his problems.

Bonnot’s dark look into the human psyche is deeply uncomfortable at times, but he seems on equally safe ground here as he is with the descriptions of the cave and the works of some of the world’s first artists. He’s steeped in the shamanic theories espoused by Jean Clottes and David Lewis-Williams, but even for a shamanic-sceptic such as me, these aspects never seem over-played.

Justin Phipps’ translation is smooth and assured, although at times some of the English colloquialisms seemed somewhat out of place in the mouths of French cops, but that’s always a difficult judgment call for any translator to take, and it’s the sort of thing where everyone’s mileage will vary.

After four complex but always vividly drawn and beautifully written books, it seems hard to believe that the Baron really is about to hand in his service weapon and live a simple, domestic life with his partner. I can’t quite believe it’s all over, and I hope we will see more of Michel de Palma and his colleagues, as well as the rich, varied settings of Marseilles and the surrounding countryside.