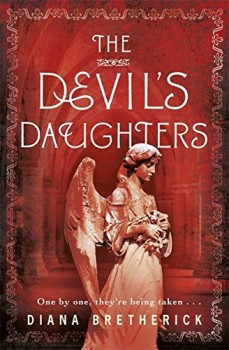 Scientist Dr James Murray returns from his father’s funeral to find a letter from the woman he loved begging him to return to Turin to find her missing cousin and plunging him and his sister Lucy into a world of danger and evil.

The Devil’s Daughters is the second in Diana Bretherick’s clever and chilling neo-Gothic thriller series based around the work and research of controversial criminologist Cesare Lombroso and set in Turin, the ‘city of devils’, in the dying years of the 19th century.

Young Scottish scientist James Murray receives a letter from the woman he loved and lost, begging him to return to Turin where her 15-year-old cousin has vanished and because of her lower-class status, the carabinieri are unwilling to investigate. Accompanied by younger sister Lucy and her mysterious chaperone, Murray returns to the city where he was apprenticed to the world-famous criminologist Lombroso and helped him resolve a series of sadistic ritualistic killings

As he embarks on his search for the missing girl, the naive and often impulsive Scottish doctor uncovers a series of disappearances of young women – and rumours linking it to an abandoned and haunted abbey on the outskirts of the city. When the body of one of the girls turns up bearing evidence of a possible satanic ritual, Murray begins to assemble some pieces of the puzzle. But as more bodies are discovered, fear grips the city and a desperate hunt begins to find a mad and terrifying killer before he claims his next victim.

At the same time Murray’s inquiries – and a completely independent investigation by his romantic teenage sister into his own behaviour – lead both into deadly danger. While Lombroso again becomes the focal point of this enthralling and cleverly developed story, Murray, the young doctor, fascinated by the criminal mind but burdened by doubts over his part in his father’s mental breakdown and death, emerges as a much more sympathetic character.

So too do the friends from his earlier adventure, Lombroso’s other former assistant, Salvatore Ottolenghi, who in real life went on to become a famous criminologist and founder of Rome’s School for Scientific Policing, and Tullio, the surprisingly modern Public Security policeman.

Then there’s Sophia, Lombroso’s beautiful, passionate and enigmatic housekeeper, every English or Scotsman’s dream of the perfect Italian woman, as haunted and conflicted as Murray by her own past and unable to commit.

The supporting cast, from drunks to sensationalist and none-too-honest journalists, pompous functionaries and the pinnacles of Turin society, are carefully and believably drawn and all play a part in building a convoluted, but horribly believable, plot to its shattering climax.

Like her complex and gripping debut, Bretherick’s superb follow-up has almost everything a reader could want in a historical novel: style and attention to historical background; more than a touch of out-and-out horror; a believable, if dangerous, coming-of age story; a sensitive love interest; a clever and surprisingly tough undercover detective and enough twists and action, some of it shockingly violent, to keep you on the edge of your seat and turning the pages.

Turin was infamous for its obsession with Satanist cults and provides a suitably sinister setting for what is as much a ‘factual’ history of the struggle for acceptance of the application of science to detection and the often haphazard and stuttering development of the art of profiling.

Lombroso, whose theories on criminal behaviour dominated the late 19th and early 20th centuries and who also constructed the prototype of the lie detector, is now largely forgotten.

His over-enthusiastic, even slapdash, approach, combined with a dubious attitude towards women and racial groups – quotes from his published work at the start of each chapter are well worth the read – mean his work, described as ‘a magnificent tangle of brilliance and nonsense’, is shunned today.

But in Bretherick’s clever setting you can see the man for what he was – a great pioneer in the field of criminal detection.  This is another superb book with the promise of more to come. Murray and his bride may be heading for a new life in America – but there’s a nasty hangover from their brushes in Turin with depravity and brutality awaiting them there!