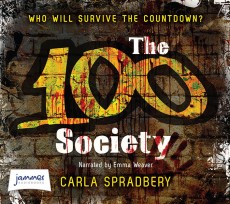 Grace Becker and her friends are determined to complete the mission they’ve set themselves – tagging 100 well-known locations around the city. But danger is stalking them.

Grace Becker is in the sixth form at the prestigious Clifton Academy. She and her friends are all gifted art students, working hard for an exhibition designed to showcase their talents. But behind the scenes, they’re working hard at something else, as well: completing the mission they’ve set themselves to tag a series of well-known locations around the city, as part of their desire to join the infamous 100 Society, named for the 100 locations they intend to tag.

Membership of the 100 Society would get Grace and all her friends expelled if anyone ever tracked the spate of graffiti in the city back to them, but they’re all determined to complete the list, leaving their mark on prominent places such as high buildings and bridges, all difficult and dangerous to access. Getting caught turns out to be the least of their worries, though, as the group find themselves being stalked by a mysterious and dangerous figure who uses a tag of the Grim Reaper to announce himself and to trump their own tags.

It soon becomes clear that the Reaper intends more than simple mischief. Grace and the others are in danger. They need to work out who the Reaper is before he kills one of them. Suspicion falls onto the loner, Daniel, who’s never been part of their group and then a series of attacks starts, leaving Grace and her friends off-balance, under threat and scared. Despite this, Grace is still absolutely determined to complete the list and become a member of the graffiti elite, risking everything to complete the list.

The 100 Society is an assured debut from Carla Spradbery. Her teenagers are daring, smart and mostly pretty likeable. There is some teenage love angst, with Grace torn between her liking and admiration for Trick (real name Patrick) and Pete. Trick is a kid from a less privileged background who’s smart and funny, covering himself in tattoos, despite this being an expellable offence. Pete is steady and dependable, always there for Grace when she needs him.

The pace rarely slackens as the teenagers fall headlong into danger on the heights of a bridge over the river in a scary confrontation with the Reaper, which one of them isn’t going to survive. But despite that, Grace is still determined to continue, no matter what it costs her.

Emma Weaver has a good range of voices, having to alternate between girl and boy, teenager and adult. Her only downfall is a slight tendency to carry over a tone that sometimes verges on hysteria from the dialogue to the narration. That can become wearying after a while, but despite that minor niggle The 100 Society provides plenty of thrills and spills, particularly during a tense stand-off in an old clock-tower at their school, the final building on the list. Whatever your views on the work of graffiti artists, The 100 Society will keep you on board until the end. There was no way I was leaving without finding out the identity of The Reaper.