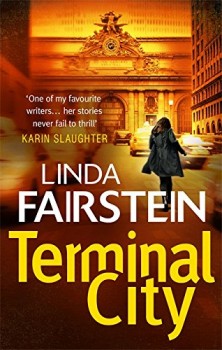 Three murders lead Alex Cooper and Detective Mike Chapman to the labyrinthine depths of the Grand Central Terminal and the homeless community that live in and around the railway tunnels and tracks.

A girl is raped and murdered in the exclusive Waldorf Towers Hotel, close to the Grand Central Railway Terminal, a ladder-like design carved into her skin. The local police, assisted by Assistant District Attorney Alex Cooper and Detective Mike Chapman, have few leads except that with the help of an experimental camera, the team identifies a single spot of blood from the killer.

A second body is found with the same mutilation and they realise that the design represents railway tracks. This leads them to the iconic Terminal building with its multiple subterranean levels and the large community of homeless people living in the tunnels and alongside the tracks.

The investigators struggle to find a connection between the victims until a third body with injuries identical to the first is found in a private railway car parked in one of the tunnels. They finally find a DNA match from the blood spot and are able to identify the culprit, the son of a lifelong railway worker, who has a comprehensive knowledge of the Terminal’s many nooks and crannies.

To complicate matters, the President of the United States is due to visit New York within 48 hours and is planning to arrive by train, so the FBI are muscling in on the investigation.

The hunt for the killer is played out in a closed Grand Central Terminal with a thunderstorm raging overhead. As the killer plays cat and mouse with the police, Alex is trapped on an upper level, from where she gets a bird’s eye view of the action below, until it climbs up to reach her with potentially deadly consequences.

I found the relationship between Alex and Mike in this novel irritating. Neither is saying what they think and at times I wanted to shut them in a room and tell them to sort themselves out. While I recognised their need to act professionally, they seemed incapable of communicating except at a superficial level. Their ongoing story makes an interesting counterpoint to the main plot, but their relationship needs to move forward.

Each of the Alex Cooper novels is set in a well-known New York location and contains a wealth of fascinating detail about the place and its history. The author clearly does a great deal of detailed research and the result is a completely believable setting for the story, although some readers may find the level of historical detail excessive.

I found Terminal City thoroughly enjoyable and I am looking forward to the next book from an author who obviously loves her city and her subject.