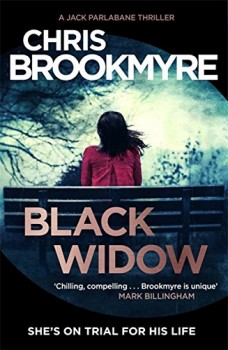 A whirlwind romance turns into a nightmare when Diana Jaeger’s husband goes missing after a car accident.

Diana Jaeger is a successful, career-driven surgeon, a woman in what is still seen as very much a man’s world. When she starts a hard-hitting blog about sexism, under the pseudonym Scalpelgirl, the intention is clearly to settle a few old scores, as well as highlighting what’s wrong with hospitals, their administration and the people who work in them.

Her blog soon earns her the nickname of Bladebitch and some of those she’s taken a swipe at are determined to hit back. When her personal details are leaked on the internet in revenge, Diana Jaeger’s life goes into freefall, leaving her battered by the inevitable storm that surrounds the revelation of her identity.

Then she meets Peter Elphinstone and things start to look up. He’s kind, attentive and does a good job of taking her out of herself. Within six months they’re married, but there’s no fairytale ending for Diana. Instead, she finds herself caught up in a nightmare when her husband’s car plunges into an icy river and his body is nowhere to be found.

Peter’s sister Lucy is convinced that the woman who came to be known as Bladebitch isn’t as innocent as she might appear, and asks reporter Jack Parlabane to make some enquiries.

Black Widow is a clever, complicated story with shifting time-lines, a potentially unreliable narrator and enough baggage to fill the hold of an Airbus 380. This is my first time in the company of Jack Parlabane, but it didn’t take long to realise that he’s a man with a rather chequered past.

In the early stages of the book, I found it hard to get on with the frequent narrative shifts from Diana Jaeger telling her story in the first person, to the third person narratives from Parlabane and the police officers trying to unravel the story of how Peter Elphinstone comes to disappear. But gradually the characters started to establish themselves in my head and the story took on a life of its own through numerous twists and turns.

Chris Brookmyre does an exceptionally good job of drawing various threads together as the past and the present collide, eventually making sense of a narrative in which truth and lies are inextricably entwined. Peeling back the various layers surrounding each of the main characters isn’t easy, and your sympathies will career around like a ball in a squash court. The more I read, the more I was hooked.