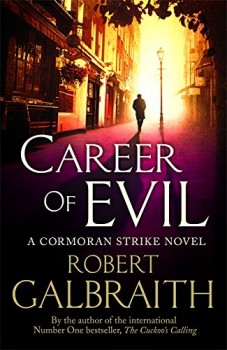 London PI Cormoran Strike pursues unsavoury characters from his army past when his assistant takes delivery of a parcel containing a severed leg.

If you’ve been reading this series, you may well agree that JK Rowling’s new hat is a very fetching one and that she appears to be having one hell of a time wallowing in the crime fiction field. And there’s no way that this is a two-hit wonder of a series – the third book, Career of Evil, really ups the ante.

Fans of the books featuring that wizard lad with the squiggly scar on his face will know that Rowling’s world-building is outstanding. And that’s one of the attractions of the Cormoran Strike books – panning across the vast panorama of London, then focussing down onto the bars and alleys of Tottenham Court Road, and the small office just off it.

But why these books work for me is because I feel invested in the characters – particularly Robin, Cormoran’s sidekick. My tolerance of ongoing romantic angst is usually in minus numbers, but the ‘will they/won’t they marry’ saga of Robin and her dull accountant boyfriend Matthew works, simply because it’s part of Robin’s new-found freedom. And there’s a shocking revelation in Career of Evil as to why her unconventional job is such a huge step forward for her.

Strike, the injured war veteran, is ostensibly the hero of the books, but Robin is more than just a stereotypical secretary. And she’s the immediate focus of the book as she receives a parcel at the office and assumes it’s wedding-related. In fact, it’s a woman’s severed leg.

Worryingly, Strike can think of a number of people who might have sent the leg. And even more worryingly, he thinks he might recognise the leg. And when he is sure the police are concentrating on the wrong man, he and Robin try to track down some unsavoury characters from his army past.

If I’m being picky, I’d say that the book could have done with a firmer editing hand and lost some of the padding as Cormoran and Robin take a mystery tour around Britain in search of dodgy ex-soldiers. And I’m not entirely convinced that clients would desert Strike’s business in droves so quickly – whoever it was who said that all publicity is good publicity wasn’t that wide of the mark when it comes to people’s fascination with the macabre.

On the most basic level, though, Career of Evil is a damn good mystery, with a tight plot and a reveal that had me admiring the author’s nerve. But best of all is the sprawling tapestry of characters, where even the walk-on parts provide a burst of colour, presided over by two leads whose lives seem to take on more depth as the series progresses.