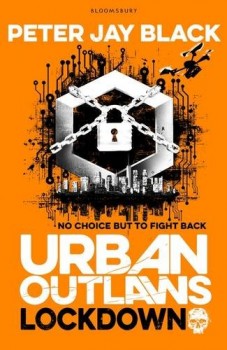 The Urban Outlaws have to make their way to the US in pursuit of criminal hacker Hector, who has stolen the world’s most advanced computer virus.

The Urban Outlaws are back. Five kids, all living on their own in a converted bunker deep beneath the streets of London, are pitted against criminal mastermind and expert hacker, Hector, who has stolen the world’s most advanced computer virus and taken off with it across the Atlantic to the US.

He’s not the only skilled hacker, though. Achilles, aka Jack, is determined to get the virus off Hector. He’s ably supported by Charlie, the Outlaws’ engineering genius. She can knock up any kind of gadget you care to imagine, and some you hadn’t even thought of. Obi is their comms mastermind, though fieldwork isn’t exactly his forte. Twelve-year-old Slink is the only one who still has contact with one of his parents, and he’s worried about leaving his mum alone, as she’s got multiple sclerosis and is about to be turfed out of a nursing home that’s closing down. She’s been happy there, but she’s now facing an uncertain future. He needs quite a bit of persuasion to get him to accompany his friends on this trip. Wren, the youngest of the group at ten, is now part of every mission the Outlaws embark on, and she’s certainly not going to be left behind.

The only way Jack can think of to get the Outlaws to the US is with the help of a shadowy figure known as The Shepherd, but what he wants them to do in return is a mission that looks about to stretch their capabilities to the limit – and possibly beyond.

The Urban Outlaws are a lively bunch. Charlie’s gadgets get them out of a lot of tight spots, as do Slink’s climbing and free-running skills. Wren comes into her own in this caper as well, proving that she’s every bit as tough as the others when she manages to take down and immobilise an adult with no problem at all, even if she does apologise to him afterwards! Jack’s leadership is tested to the full, as well, as each of the Outlaws has to operate to the very limit of their knowledge and expertise to survive.

Peter Jay Black’s characters are likeable and engaging. Their talents are well-displayed, and their creator always keeps things on the right side of believable, grounding the book in reality, even when he’s stretching their imaginations almost to breaking point. They’re a close-knit group, loyal to each other and to their friends.

This outing is every bit as fast-moving as their previous exploits and I thoroughly enjoyed their battle of wills with the horrible Hector. But, in keeping with all the best traditions of villainy, we definitely haven’t seen the last of him!