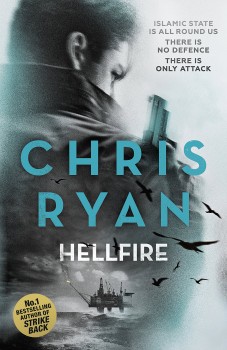 Danny Black is in command of a small team sent to carry out a hostage rescue in Nigeria. What awaits them there is far more dangerous than anything they could have expected.

SAS soldier Danny Black is back in Chris Ryan’s fast-paced, hard-hitting and frighteningly topical Hellfire. The book opens with a chilling scene where a young British Muslim extremist, newly-arrived in the bleak borderlands between Syria and Iraq, proves his loyalty to his new masters by beheading, on camera, a British hostage.

From there, the action shifts to Nigeria where a four-man team headed by Black is deployed to find the British High Commissioner and his aide who have been kidnapped by yet more extremists, this time the very dangerous group Boko Haram, who’ve been in the news all too often recently for mass murder and equally mass rape.

The other three members of Danny’s team are Tony Wisemen, a smart-arse wide-boy thought to be flogging regimental ammo to his dodgy mates, who doesn’t take well to being told what to do; solid, dependable Ripley and, most surprisingly, a woman, Caitlin Wallace, ex-Australian army and an expert on Nigeria. Unsurprisingly, that doesn’t go down well with Wiseman, nor does Danny’s decision not to delay their mission when their Para back-up can’t reach them in time for their agreed departure time. But Danny knows any delay on their part will seriously harm their chances of getting the hostages out alive.

A breakneck race against time through the wilds of Nigeria turns into something even more sinister and dangerous when they stumble on a joint plot by the so-called Islamic State and Boko Haram to unleash a bio-engineered plague on the world. It’s up to Danny and his team to find a man called the Caliph and stop the plague from being spread, helped – or should that be hindered? – by the ever-slimy Hugo Buckingham from the security service. Also in play is Danny’s old regiment mate, Spud, who isn’t taking well to being consigned to a desk job shadowing an intelligence analyst, following a serious injury.

Ryan writes well and convincingly about difficult subjects, bringing some hard moral dilemmas into the spotlight and demonstrating, once again, that there are no easy answers in today’s world. Black is an easy man to like, despite the almost clinical ruthlessness he’s capable of bringing to bear on some of the problems he runs up against. He’s more than just a macho bloke with a big gun. He’s intelligent, analytical and very, very determined. Ryan’s own SAS background shines through in his ability to lob in enough detail to convince, without in any way slowing down the pace.

This is a seriously readable thriller that gallops at speed to a conclusion that doesn’t pull any punches whatsoever.