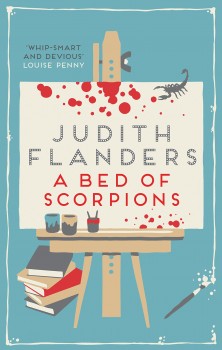 A Bed of Scorpions

Book editor Sam Clair finds herself embroiled in her cop boyfriend’s murder case when an old friend from the art world is found dead.

Book editor Sam Clair has all the usual job hassles – piles of manuscripts, gossiping colleagues and a boss who has turned procrastination into an art form. But she also has an unerring ability to end up in the middle of a murder enquiry.

First time out, it was one of Sam’s authors who went AWOL. In this second book, Sam’s ex-boyfriend Aidan arranges to meet her for lunch, but isn’t on tip-top form. Not surprising, given his business partner has just been found dead at their art gallery. Then a second art world body appears, and Sam’s current partner, cop Jake Field, is less than impressed with her involvement in his case.

The book ventures into both the publishing and art worlds, and you get the distinct feeling that Judith Flanders has peopled the pages with incidents and folk she has come across in her career. And one of the clues is a publishing geek’s dream!

A Bed of Scorpions is an absolute delight from start to finish. Flanders, who has worked in publishing, has created a lead character that we’d like to be – or would happily be friends with. Sam is 40-something, good at her job, self-sufficient and with a comeback for every occasion. And her being embroiled in the case never stretches the bounds of credibility. In fact, she’s usually trying to back off from it – but isn’t a woman to be wrapped in cottonwool.

Flanders plots cunningly, writes dialogue that crackles off the page and surrounds Sam with a tremendous supporting cast. Jake has more flesh on his bones this time out, but scenes are continually stolen by Sam’s wonderful Gothy assistant Miranda, and by no-nonsense Helena, Sam’s high-flying lawyer mother. And I adore Mr Rudiger, who lives in the upstairs flat and never ventures out, but provides a safe haven for Sam.

The final scenes had me squeaking in fear as they seemed all too horribly plausible. They rounded off a good-humoured, sparky and charming mystery to perfection.

Oh, and warning, warning: Writers’ Block, the first book in the series, got renamed A Murder of Magpies somewhere along the line.